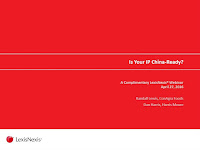 "Understanding China is not about learning the law and regulations, it's about understanding the people," Randall Lewis, Vice President, International Counsel at ConAgra Foods, correctly noted during a webinar produced by LexisNexis on Apr. 27, 2016. He continued to say: "It's about learning how to communicate with the [Chinese] people and embracing a new way to view the world." The webinar, "Is Your IP China-Ready?" focused on intellectual property (IP) risk prevention in the Chinese marketplace.

Mr. Lewis, together with Dan Harris, a founding member of Harris & Moure, addressed a multitude of topics including choosing a good Chinese partner, identifying the IP assets that need protection, structuring your deal to protect your IP, conducting post-deal due diligence, drafting China contracts to protect your IP, and choosing language for arbitration, forum and the ability to seek local injunctions carved out from any arbitration clause.

Mr. Lewis expressed that "one of the most important things about China is its politics." If you do not understand Chinese politics, Mr. Lewis asserts, then it is difficult to structure a business transaction or resolve a legal dispute. Furthermore, China is a political economy where the entire country is ruled by its politics. In fact, Mr. Lewis explained, Chinese politics are embedded in all institutions including the judiciary, education, and most large companies. With respect to the Chinese government's role in business, Mr. Lewis said the government often lacks sophistication and institutional framework, and foreigners may encounter a less professional demeanor from Chinese government officials compared to what they may be accustomed to in their home market.

On the topic of choosing a business partner in China, Mr. Lewis encourages foreign businesses to identify the decision-maker of the potential Chinese partner, as well as the most powerful person within the company. He also explained that the Chinese business partner places a higher emphasis on personal relationships than a contract and "how you say something is more important than what you say."

Foreign companies should expect contract negotiations to occur over a long period of time, which foreign companies are unaccustomed to and may find frustrating. To facilitate the process, Mr. Lewis recommends establishing some targets, but not a deadline to make a decision or finalize a deal.

Interestingly, Mr. Lewis remarked that "there are two type of people you will meet in China: an older generation (loosely defined by Mr. Lewis as older than 55 or 60 years of age whom were beneficiaries of Deng Xiaoping's economic reforms) and a younger generation." More experienced Chinese business people may not read contracts before signing them, rely more on Gunaxi (addressed more thoroughly below), and be more aggressive during the negotiating process. Conversely, the younger generation is better educated, may prefer the legal process of contract negotiations, and negotiate more fairly.

Guanxi (关系), which may be described as the basic dynamic in personalized networks of influence (which can be best described as the relationships individuals cultivate with other individuals) and is a central idea in Chinese society, is integral for foreigners to achieve business success in China. While Mr. Lewis explained the importance of relationship-building with Chinese business people through face-to-face meetings, social activities such as drinking together or long dinners in order to get to know them on a personal level, Guanxi is different than corruption. The positive outcomes of Guanxi may include references of honorability or credibility; whereas, a negative outcome is when your connections may help you in an illegal way.

While many of the points Dan Harris presented in this webinar may also be found in a presentation he gave in a webinar on Mar. 30, 2016, which I wrote about in a post on this blog, there are a couple of items that are worth mentioning. First, according to Mr. Harris, many documents produced during the due diligence process in China may be fake. "We have seen fake insurance policies, fake IP registrations, fake contracts, and it just goes on and on and on," Mr. Harris said.

More concisely, according to Mr. Harris, distrust all company information. He also suggests asking people about the Chinese company you are seeking to do business with including visiting the company's office or facility. Scrutinizing the paper may also help identify whether or not the document presented by a Chinese company is fake. 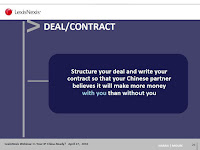 I also appreciate Mr. Harris' point: "Structure your deal and write your contract so that the Chinese partner believes it will make more money with you than without you." This is important because of the challenge foreign companies may encounter in enforcing a contract in the Chinese court system. Moreover, Chinese companies operate differently compared to American companies. If the former believes the latter is no longer useful, the odds of the Chinese company abiding by the contract decreases, Mr. Harris explained. "It is very important for you to understand Chinese business, China's economy, and write your contract accordingly," he added.

While this post addresses just a few of the many interesting and relevant points from the webinar about doing business in China, you can view the webinar in its entirety through this website and download the presentation slides through SlideShare.

Aaron Rose is a board member, corporate advisor, and co-founder of great companies. He also serves as the editor of Solutions for a Sustainable World.
Posted by Aaron Rose at 11:56 PM No comments: