When people ask me about Haïti, I often respond that the Caribbean country possesses a great uniqueness in its history (gained independence as a free slave nation in 1804), language (Creole) and culture (art, religion, fashion, etc.). While I can never claim to be an art critic, I certainly have an appreciation for the different art genres that make each country unique and the art I have seen during my visits to Haïti are some of the most unique pieces I have encountered during my travels around the world. (Photo: Maggie Steber for The New York Times)

Ms. Kate Taylor wrote an article for The New York Times about restoring murals in the Episcopal Holy Trinity Cathedral, which is located in Haïti’s capital of Port-au-Prince. “Haitian artists and cultural professionals have been conducting informal salvage operations for the past four months,” explains Ms. Taylor. “But the Americans are bringing conservation expertise — there are few if any professionally trained art conservators in Haiti — and special equipment, much of it paid for by private money.”

Conservators “visited the ruins of the Musée d’Art Nader, a private museum that before the earthquake housed 12,000 paintings and sculptures by 20th-century Haitian masters like Hector Hyppolite and Préfète Duffaut, thousands of which were either destroyed or badly damaged when the museum collapsed. They also saw what was left of the Centre d’Art, a workshop where many of those artists trained in the 1940s and 1950s, which also collapsed. In the weeks after the earthquake, volunteers pulled thousands of paintings from the wreckage, which were stashed inside two storage containers parked in the sun in front of the ruined building.”

A recent news-magazine program, “UN 21st Century,” also highlighted the earthquake’s impact on Haïtian artists. Not only did thousands of dollars worth of art get destroyed in the January earthquake, but the ability to export the art to global markets has greatly diminished. You can watch the episode in its entirety below: 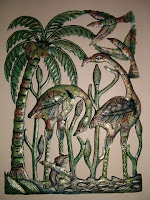 However, all is not lost and there is an opportunity for you to help Haïtians by purchasing their unique artwork. My friend, Alyssa Johnson, wrote an entry on this blog about the uniqueness of Haïtian art and how artists are able to sell their work and generate income. Alyssa is owner of Splash of the Caribbean, a Seattle-based Caribbean art import company that purchases art directly from artists located in Haïti and throughout the Caribbean. (Photo: Alyssa Johnson)
Posted by Aaron Rose at 1:52 AM No comments:

Should I Buy a Drink or Send my Child to School?

“There’s an ugly secret of global poverty, one rarely acknowledged by aid groups or U.N. reports. It’s a blunt truth that is politically incorrect, heartbreaking, frustrating and ubiquitous: It’s that if the poorest families spent as much money educating their children as they do on wine, cigarettes and prostitutes, their children’s prospects would be transformed. Much suffering is caused not only by low incomes, but also by shortsighted private spending decisions by heads of households.” This comes from Nicholas D. Kristof’s op-ed in The New York Times on May 22, 2010.

Mr. Kristof cites examples of parents unable to pay their housing rent, mosquito nets that help combat malaria or school fees for their children, but they are spending scarce financial resources on alcohol, cigarettes, and prostitutes. His also op-ed refers to a study by two Massachusetts Institute of Technology economists, which claim that “the world’s poor typically spend about 2 percent of their income educating their children, and often larger percentages on alcohol and tobacco: 4 percent in rural Papua New Guinea, 6 percent in Indonesia, 8 percent in Mexico. The indigent also spend significant sums on soft drinks, prostitution and extravagant festivals.”

I know this issue extends beyond the developing world to industrialized nations. The global solution lies within financial education. Furthermore, social services must be offered for people to overcome their addictions to drugs and alcohol. With respect to financial education, there is evidence that women tend to be more responsible when it comes to money management and initiatives implemented by nongovernmental organizations, government agencies, and the private sector should be tailored to further support this trend.

Another solution lies within microsavings, which are small deposit accounts. Microsavings accounts operate similar to a conventional savings account, but the former are designed for smaller amounts of money. Pairing microsavings accounts with financial education programs will promote wiser spending decisions by parents, which will result in long-term sustainable development.
Posted by Aaron Rose at 3:24 AM No comments: