The role of the mobile technology sector in driving economic growth is a topic that is discussed regularly in this blog. Whether it is in India, Latin America, Southeast Asia, or Sub-Saharan Africa, the mobile ecosystem can play a vital role in empowering billions of people while achieving the 17 Sustainable Development Goals (SDGs), which seek to end poverty, protect the planet and ensure prosperity for all. This post focuses on a report, The Mobile Economy: West Africa 2018, produced by the GSMA Intelligence, the research arm of London, England-based GSMA,

Available in both English and Français, the report presents three major points:

Mobile adoption on the rise

"By the end of 2017, there were 176 million unique subscribers across the West Africa sub-region, comprising the 15 member states of the Economic Community of West African States (ECOWAS),"  Overall subscriber penetration reached 47% in 2017, up from 28% at the start of this decade. Despite the remarkable subscriber growth in the sub-region in recent years, and indeed across Sub-Saharan Africa, more than half of the region's population do not yet subscribe to a mobile service."

Moreover, "Subscriber growth will be driven by a demographic shift in the coming years, as many young adults take out a mobile subscription. Over the period to 2025, around 72 million new mobile subscribers will be added in West Africa, taking subscriber penetration to 54%.

The study importantly explains that "the transition to mobile broadband is gaining momentum across West Africa. 3G remains the dominant mobile broadband technology, but 4G adoption is rising rapidly from network expansion and greater availability of 4G devices. The number of smartphone connections has more than doubled over the last two years to reach 112 million, accounting for 35% of total connections on average at the end of 2017."

Mobile contributing to GDP and employment

The GSMA study says the mobile ecosystem contributed $37 billion to the West African economy in 2017, equivalent to 6.5% of GDP. "The mobile ecosystem consists of mobile operators, infrastructure service providers, retailers and distributors of mobile products and services, mobile handset manufacturers, and mobile content, application and service providers. The use of mobile technology also drives improvements in productivity and efficiency for workers and firms. 3G and 4G technology allow workers and firms to use mobile data and internet services. This improves access to information and services, which in turn drives efficiency in business processes across many industries, including finance and health. This impact of mobile internet is particularly significant where fixed infrastructure is poor and mostly confined to large cities and business & industrial districts."

What is more, "Mobile operators and the wider mobile ecosystem provided direct employment to more than 200,000 people in West Africa in 2017, predominantly in the retailing and distribution of services and handsets. In addition to this, economic activity in the ecosystem creates jobs in other linked sectors as a result of the demand generated by the mobile sector. Going forward, we expect the economic contribution of the mobile ecosystem to continue to increase in both relative and absolute terms. In value-added terms, we estimate that mobile will contribute $51 billion to the West African economy by 2022, equivalent to 7.7% of GDP."

Encouragingly, "The number of mobile internet subscribers doubled over the last four years to reach 78 million, nearly half of the total number of mobile subscribers, by the end of 2017." The number of registered mobile money accounts in the sub-region reached 104.5 million in 2017, while the total value of transactions for the same period reached $5.3 billion. The rapid adoption of mobile services and the funding and infrastructure gaps in the provision of essential services present an opportunity for local innovators to create digital solutions that address a wide range of social and economic challenges across different countries in the sub-region. As of February 2018, there were 142 active tech hubs across West Africa."

Based on my experience of working in West Africa, I agree with the report's assertion:

Collaboration among all stakeholders is required to sustain growth and innovation in the mobile industry across the sub-region. In addition to the work of operators to expand and improve networks, significant efforts from governments at all levels are needed to create the right conditions for continued investment. At the supranational level, ECOWAS is well placed to convene and facilitate dialogue between multilateral stakeholders; serve as a hub for knowledge sharing and dissemination with regards to best practices; and provide a platform to harmonize differences in approach towards key issues that impact the mobile industry across the sub-region. At the country level, national and municipal governments have a role to play in addressing fiscal and regulatory issues that directly impact investment sentiments, especially on capital-intensive infrastructure deployment and the rollout of innovative mobile-based services.

Are you engaged in West Africa's mobile economy? If so, what advice to you have in creating solutions that will end poverty, protect the planet and ensure prosperity for all?

Aaron Rose is a board member, corporate advisor, and co-founder of great companies. He also serves as the editor of Solutions for a Sustainable World.
Posted by Aaron Rose at 3:34 PM No comments:

Poor Communication Is Having a Tremendous Impact on the Workplace 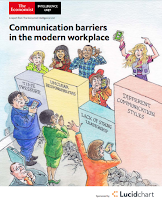 Merriam-Webster defines 'communication' as a process by which information is exchanged between individuals through a common system of symbols, signs, or behavior. This simple concept is often painstakingly difficult to implement effectively in any company. Therefore, I read with great enthusiasm the findings of a survey conducted by The Economist Intelligence Unit (The EIU) and sponsored by Lucidchart, a visual productivity platform that helps anyone understand and share ideas, information, and processes with clarity, that reveals some of the perceived causes and effects of these communication breakdowns.

Entitled Communication barriers in the modern workplace, the survey's executive summary says, "It wasn't long ago that a work meeting meant gathering around a table to discuss an agenda. These days you may be using Slack, Hangouts or other digital collaboration platforms that blend messaging with video and allow real-time editing of documents. Even with these tools, communication at work can still break down, potentially endangering careers, creating stressful work environments and slowing growth."

The survey, conducted from November 2017 to January 2018, included 403 senior executives, managers and junior staff at US companies divided equally and from companies with annual revenue of less than US$10m, between US$10m and US$1bn and more than US$1bn. The survey research provides insights about what employees see as the biggest barriers to workplace communication, the causes of the barriers and their impact on work life. Below are the survey's key highlights:

Poor communication is having a tremendous impact on the workplace.

"Unclear instructions from superiors, pointless meetings and other stressors can snowball into larger issues with widespread impacts on the business. Respondents say communication barriers are leading to a delay or failure to complete projects (44%), low morale (31%), missed performance goals (25%) and even lost sales (18%)—some worth hundreds of thousands of dollars."

The most frequently cited cause of communication barriers is fundamentally human: different communication styles.
"In an age of constantly changing and real-time communication tools, this barrier is made more complex by generational and functional differences in communication preferences."

The use of instant messaging and social media at work reflects a gap between how generations use certain communication tools.
"Nearly a third of millennials (31%) say they use instant messaging at work every day, compared with only 12% of baby boomers. Tomorrow's executives will find they have to adapt if they want to be effective today when working with older generations that prefer to pick up a phone. At the same time, older generations would be wise to embrace the new communication tools on which developing leaders will continue to rely."

There is a discrepancy between the communication tools that people find most effective and the ones they regularly use.
"Visual-based tools, for example, are relatively underused compared with their effectiveness. Video conferencing, presentation decks, white boards and sketch pads are largely seen as somewhat or very effective at helping respondents share ideas and understand them well. However, email, which is the most commonly used method of workplace communication, is not considered very effective by the majority of respondents."

An employee's place in the pecking order affects the fallout they face from poor communication.
"Middle managers tend to be affected the most by communication barriers. For example, nearly half of directors (49%) say their colleagues experience the consequences of poor communication either frequently or very frequently—more than C-level executives and non-manager employees. This fact though is not so surprising considering they are constantly conveying information back and forth between senior executives and junior employees, both of whom have different approaches to communication."

As a manager, I appreciate the report's findings that "[o]vercoming communication barriers will ultimately have to involve not only accommodating different personal styles, but also ensuring that management's communications are effective and account for generational differences in how information is shared at work." Moreover, "Different communication styles and ineffective use of communication tools are contributing to the lack of clarity about responsibilities that is evident in the research, and certainly adding to workplace stress levels. In fact, the survey shows that unclear instructions from a senior colleague or manager is the most frequently cited stressful situation at work."
Lastly, I find comfort in the report's concluding paragraph:


Work environments don't have to be full of miscommunication land mines, and businesses can take practical steps to improve communication. Meetings are a good place to start. The survey shows that 78% of respondents think having clearer goals for every scheduled meeting would have a significant impact on improving workplace communication, including 39% who say the improvement would be very significant. Moreover, six out of ten respondents say firm-wide training (62%) and having a wider range of communication tools to use (63%) would significantly improve work communication. By improving in areas such as these, as well as being aware of communication differences and the best applications of various tools, the workforce can both communicate more effectively and keep pace with the inevitable continuous change in when and how we connect at work.

Do you have any recommendations on how to communicate more effectively in the workplace?

Aaron Rose is an advisor to talented entrepreneurs and co-founder of great companies. He also serves as the editor of Solutions for a Sustainable World.
Posted by Aaron Rose at 5:15 AM No comments: