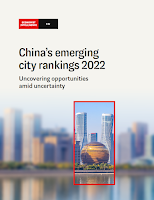 As a strategic advisor to business executives, I am often asked which cities in China provide the best opportunities for corporate expansion. To provide an informed opinion, I utilize information provided by the Economist Intelligence Unit (EIU) such as the EIU's China Emerging City Rankings, which identifies urban centers with the greatest growth potential and includes parameters that will guide development and influence companies' long-term strategies.
Most people familiar with the China market events will concur with the EIU's 2022 version of its China Emerging City Rankings that "Chinese cities have faced extraordinary challenges and mounting uncertainty since late 2021." The report adds: "The debt crisis facing China's domestic property developers has fueled concerns over the health of not only local property markets, but also the fiscal position of local governments. A nationwide energy crisis has also forced authorities to strike a delicate balance between achieving carbon neutrality and sustaining economic growth. The spread of the highly-contagious Omicron variant of covid-19 has tested the efficacy of China's 'dynamic zero-covid' doctrine, as prolonged lockdowns across dozens of cities inflict massive shocks to local economic growth."
Aiming to address which cities have the greatest growth potential in the overall ranking, which cities can best navigate China's property woes, and which cities have higher economic resilience to covid-19 outbreaks, the report's key findings include:
Diving deeper into which cities have the greatest growth potential in the EIU's overall ranking, Hangzhou (Zhejiang) topped the emerging city rankings in 2022 following by other large cities on China's east coast (see map below). "With strong population inflows and industrial bases," the EIU explains that "these cities will play important roles in national strategies to move China up along global value chains, including via processes that include technological upgrading and a (longer-term) emphasis on decarbonization. In addition to coastal cities, some provincial capitals also feature within our top 10 ranking, such as Hefei (Anhui) and Chengdu (Sichuan). These outcomes reflect the success of these cities in developing their 'strategic emerging industries,' which have become increasingly important drivers of future industrial growth." 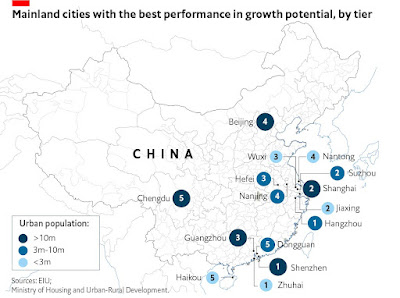 Regarding China's property woes, the EIU points out that "The debt crisis facing China's domestic property developers, has fueled concerns over the health of not only local property developers and banks, but also the fiscal position of local governments. These events have caused property prices across Chinese cities to plunge in recent months. This combined with the broader pandemic-induced economic slowdown have also prompted local mortgage boycotts, exacerbating property sector strains."
As for which cities can best navigate China's property woes, "Recent growth patterns in average land transaction prices, which could foreshadow housing price trends in the near future, illustrate that Hangzhou (Zhejiang) and Guangzhou (Guangdong) stand out in attracting population inflows–should sustain future local property values, even as authorities clamp down on speculative behavior."
For those businesses operating in China, the EIU's report serves as a useful tool for uncovering opportunities amid uncertainty.
Aaron Rose is a board member, corporate advisor, and co-founder of great companies. He also serves as the editor of GT Perspectives, an online forum focused on turning perspective into opportunity.
Posted by Aaron Rose at 3:57 PM No comments: 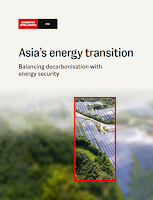 According to a report published by the Economist Intelligence Unit (EIU), "Asia's energy transition and decarbonization strategies are determined by two factors: Asia is forecast to be the region with the fastest growth in electricity consumption over our ten-year forecast period (2022-31); and it is the most reliant region on coal for its power generation." What is more, "The combination of these two factors makes it challenging for governments to decarbonize their power sector while satisfying increasing demand for electricity, and without compromising energy security."
The EIU's report further explains that "[t]his dilemma explains why, despite being the world's biggest market for renewable energy investment, Asia's dependency on coal is far from waning." In fact countries such as "China, India and Indonesia, among other countries in the region, are still approving and building new coal-fired power plants. Furthermore, governments' bets on coal have only increased since Russia invaded Ukraine earlier this year, intensifying an already acute global crunch in gas supplies."
However, the EIU expects "renewables to increase their share in power generation over the next ten years. In China, the share of energy from non-hydro renewables in total generated electricity will rise from 15% currently to about 26% in 2031, while in India this share will grow from 11% to 21%. In Japan and South Korea, renewables will also grow strongly, from 15% to 23% and from 7.5% to 19.5% respectively."
Below are the report's key findings: 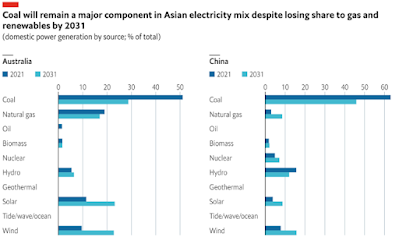 "The varying economic and climatic fundamentals of Asian countries will govern the positions that they take on key issues at the upcoming COP27, the UN climate change conference to be held in Egypt in November 2022," the EIU notes. "Although most major Asian countries have submitted net-zero pledges, their Nationally Determined Contributions (NDCs) still lack detailed plans on how they intend to reach their emission-reduction targets."
The UK-based organization concludes its report with the following:

The negotiations at the COP27 are likely to be contentious, and it is difficult to foresee any significant progress. Owing to a volatile economic and geopolitical environment, developing Asian countries such as India and Indonesia will find it ever more difficult to secure meaningful commitments from the developed world to finance their energy transition. The lack of sufficient mitigation finance, a monetary tightening cycle in major Western economies and high material costs for renewable projects will make energy transition costlier. This will result in countries showing greater resistance to wean themselves off dirty fuels such as coal, and could weaken the climate policy stance taken by developing Asia at the conference. Furthermore, recent extreme weather events in Europe and the US are likely to shift domestic public sentiment in those countries towards channeling climate adaptation funds towards domestic needs before committing to assist other countries. This will be detrimental to negotiations on providing financial support for adaptation to climate change, which is a major cause for concern for many developing Asian countries.

This report provides a good summary on the trajectory of Asia's energy mix over the EIU's ten-year forecast period. What are the implications of Asia being the fastest-growing region for electricity consumption during the next decade? How do you think the region will overcome challenges of decarbonization to meet the increasing demand for electricity?
Aaron Rose is a board member, corporate advisor, and co-founder of great companies. He also serves as the editor of GT Perspectives, an online forum focused on turning perspective into opportunity.
Posted by Aaron Rose at 11:26 PM No comments:

"As climate-related weather events become a greater risk across the globe and in the United States," a report produced by the GSM Association (GSMA) explains that "innovative and inclusive early warning systems (EWS) are critical to mitigate these risks and strengthen preparedness for climate disasters." Moreover, "The frequency and impact of climate-related events have escalated in the US in recent years, negatively impacting communities and resulting in loss of life, property and livelihoods."
Funded by the UK's Foreign, Commonwealth and Development Office, GSMA's report evaluates the gaps in EWS for climate-related hazards in the US, and identifies examples of mobile and digital interventions used at the community level in low- and middle-income countries (LMICs) that could help underserved and vulnerable groups become more resilient to climate-related disasters. The report also provides specific recommendations for closing identified gaps to strengthen EWS in the US.
The report's key findings include:
The GSMA proposes the following recommendations to help develop inclusive climate resilience strategies:
Co-design EWS with communities to strengthen communication, dissemination and response capability. "The current approach in the US aims to do this, but is often poorly implemented. Bringing American community organizations and municipalities together to develop new and/or modified EWS delivery models for Integrated Public Alert and Warning System (IPAWS) message initiation, or transfer to another system, will help develop localized models and strengthen community trust."
Investigate opportunities to leverage multi-channel EWS communication to reach a wider group of users and improve users' responses to messages. "In the US, message recipients are more likely to act if they receive a warning multiple times from different platforms. Message solutions like CHANTER could be used in combination with existing systems to amplify messages and make them more relevant, resulting in more specific messages being delivered to recipients' phones. When local communities are stakeholders and involved in managing such solutions, messages sent through the community-based channel would most likely be considered trustworthy and, therefore, prioritized."
Strengthen multi-language EWS messaging. "Leverage low-cost systems to rebroadcast messages in multiple languages. Local governments may also use other systems to auto-translate messaging for minority languages in coordination with user representatives from these communities. There is also an opportunity to pilot AI-powered auto-translate systems, for example, talking books to reach users who are not literate."
Engage partners in educating customers about wireless emergency alert (WEA) and local opt-in alert and warning systems. "Local communities can partner with local wireless operators to provide information to consumers on the benefits of WEA and local opt-in systems. This could be implemented as a corporate social responsibility initiative, alongside civil society groups and county emergency offices, hosting targeted workshops and advocacy campaigns that highlight the importance of residents signing up for warning messages and gathering feedback from residents on their preferences and potential challenges related to receiving disaster warnings."
According to the National Oceanic and Atmospheric Administration's National Centers for Environmental Information, there were 142 weather- and climate-related disasters costing at least $1 billion each have been recorded in the US in the past 10 years. The most common and costly events were hurricanes, cyclones, and wildfires. The estimated cumulative cost of these events between 2012 and 2022 was more than $1 trillion.
The GSMA importantly notes that "Planning for climate change requires that government institutions and local communities adapt and prepare systems and strategies to mitigate the risks of climate-related disasters and build their resilience and capacity to respond." This report presents some valuable insights into how to create innovative and inclusive climate resilience strategies by closing gaps to strengthen early warning systems in the US.
Do you agree with the report's recommendations?
Aaron Rose is a board member, corporate advisor, and co-founder of great companies. He also serves as the editor of GT Perspectives, an online forum focused on turning perspective into opportunity.
Posted by Aaron Rose at 10:57 AM No comments: