I strongly support any initiative from the private sector that provides financial support to emerging companies designing innovative solutions to current or preventing future problems. Investments made by Microsoft, Boeing, IBM, Intel, and Cisco Systems, just to name a few, have allowed other companies to create, market, and launch innovative products and services that millions, or perhaps billions, of people use daily.

GE is one such company that has created a fund to support healthcare technology companies. On October 21, 2009, GE announced "the formation of the 'GE Healthymagination Fund', a new equity fund that will make investments in highly promising healthcare technology companies. The fund will invest in companies globally that have innovative diagnostic, IT, and life sciences technologies aligned with the strategic objectives of GE's Healthymagination initiative. The fund will also support healthcare companies developing innovative and unique business models and services."

Furthermore, according to the Fairfield, Connecticut-based company, "The formation of the fund is part of GE’s $6 billion Healthymagination initiative, a global commitment to deliver better healthcare to more people at lower cost." Creating a global footprint, the fund will draw on capabilities from across GE Healthcare, GE Capital and GE Global Research. Moreover, the fund will target three areas for investment:

Here is an advertisement for GE Healthymagination:

Posted by Aaron Rose at 6:08 AM No comments:

This is the first of several entries that will address the topic of "cloud computing." According to the National Institute of Standards and Technology (NIST), "Cloud computing is a model for enabling convenient, on-demand network access to a shared pool of configurable computing resources (e.g., networks, servers, storage, applications, and services) that can be rapidly provisioned and released with minimal management effort or service provider interaction."

In other words, cloud computing is a general term for anything that involves delivering hosted services, over the Internet and the name cloud computing was inspired by the cloud symbol that is often used to represent the Internet in flow charts and diagrams. Hosted services include software (word processing, spreadsheets, presentation slides, etc.) that you would have ordinarily purchased a hard-copy or downloaded through an online vendor. From across a variety of sectors including government, nonprofit, academic, and the private sector, cloud computing will revolutionize the way people access software and Internet services.

Even the U.S. government is engaging in the benefits of cloud computing. On September 15, 2009, the Obama Administration "announced the launch of the General Services Administration's (GSA) cloud storefront Apps.gov. This online storefront enhances how the government leverages technology by enabling federal agencies to acquire and purchase cloud computing services in an efficient, effective manner." Furthermore, according to GSA's press release, "The new Apps.gov, a one-stop shop to purchase cloud computing services, is part of the government's push to improve the cost-effectiveness of IT services and sustainability of IT infrastructure. It is one element of a multi-pronged cloud computing program that is addressing not only acquisition, but also related policy, security, training, coordination, architecture and standards....Apps.gov will also offer free social media and web 2.0 tools such as wikis and blogs to federal agencies."

Aaron Rose is an advisor to talented entrepreneurs and co-founder of great companies. He also serves as the editor of Solutions for a Sustainable World.
Posted by Aaron Rose at 12:05 AM No comments:

Shelterbox: Providing Immediate Relief to Victims of Natural and Other Disasters

I recently attended a STAR-TIDES research demonstration at the Pentagon, located just outside of Washington, D.C. STAR-TIDES is an acronym for Sustainable Technologies, Accelerated Research-Transportable Infrastructures for Development and Emergency Support, which is geared to organize inexpensive and effective solutions for humanitarian emergencies or post-war reconstruction. Several companies demonstrated fascinating technological products, which have an immediate impact in the developing world or in any humanitarian emergency. One such product is the Shelterbox, a large, rugged, green plastic container that holds a 10-person tent and a range of other equipment necessary in providing immediate relief to victims of natural and other disasters anywhere around the world.

The nonproft organization explains, "Shelterboxes are sponsored by service clubs, (Rotary Clubs), school and church groups, businesses and individuals, etc. Materials are ordered from a range of suppliers selected for general use, long-life, quality and price. Shelterboxes are prepared and packed using all new materials as delivered from manufacturers, at the Shelterbox warehouse based in Helston, Cornwall. The standard Shelterbox weighs 110 lbs. and has approximate dimensions 2'3" x 1'4" x 11". They are sealed and banded for transit and security. Box contents vary depending on the nature of the disaster requiring their use. Boxes are sometimes packed with two 10-person tents in them, (to the exclusion of some smaller items, to maximize shelter capacity)."

Some of the selected items that are available for inclusion in the Shelterbox are:
The contents are under continuous review. A small stock of wind-up radios (short-wave and 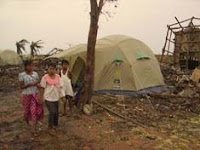 FM) has been obtained to substitute a sleeping bag in every tenth box should such a requirement arise. For shipping purposes, a large container (40 feet) can accommodate up to 240 Shelterboxes, smaller containers would typically be half the size and quantities. The Shelterbox is designed to enable a family of up to ten people survive for at least six months. (Photo from Myanmar courtesy of Shelterbox USA)

According to the nonprofit's website, the first 140 Shelterboxes were sent to Gujarat in India following a devastating earthquake in 2001. Since then, ShelterBox has responded to more than 80 disasters in over 50 countries, sending out nearly 75,000 boxes worldwide – providing emergency accommodation for more than 500,000 disaster victims.

Aaron Rose is an advisor to talented entrepreneurs and co-founder of great companies. He also serves as the editor of Solutions for a Sustainable World.
Posted by Aaron Rose at 12:36 PM No comments:

On October 8, 2009, United States Department of Energy (DOE) Secretary Steven Chu "announced up to $87 million will be made available to support the development of new solar energy technologies and the rapid deployment of available carbon-free solar energy systems. Of this funding, $50 million comes from the American Recovery and Reinvestment Act. The 47 projects with universities, electric power utilities, DOE's National Laboratories, and local governments have been selected to support use of solar technologies in U.S. cities, help address technical challenges, ensure reliable connectivity with the electrical grid, and train a new generation of solar workers to install and maintain solar energy systems."

While I am concerned with the expansive spending created under the American Recovery and Reinvestment Act, I am encouraged to see investments made in developing solar energy technologies. As I have written in this blog, clean tech research and development is quickly becoming a driving force in the American economy.

DOE's press release further explains, "The selected projects will help accelerate the commercialization of solar technologies in an effort to achieve cost-competitive solar electricity by 2015, in addition to developing advanced solar technologies for the future. Projects focus on both technology improvements and the elimination of market barriers to help make solar electricity accessible to a wide variety of consumers."

The projects selected for negotiation of awards are in four categories:

The Consumer Electronics Association (CEA)®, an Arlington, Virginia-based trade association promoting growth in the $172 billion U.S. consumer electronics industry, "launched the new Innovation Movement 'Apps for Innovation' contest and opened an online portal for submissions of software applications for judging by a panel of industry experts. The grand prize winner will receive $10,000 and a free trip to the 2010 International CES®" in Las Vegas, Nevada from January 7-10.

According the CEA's press release dated October 7, 2009, "The contest is looking for developers to build apps that demonstrate how innovation and entrepreneurship are making an economic impact in the United States. The contest will also accept submissions from developers that create apps to help consumers advance policy goals that support innovation."

CEA's press release further explains that "in addition to the grand prize winner, judges will award a second place of $5,000 and a third place of $3,500. The best apps will be included in the 'Apps for Innovation' library, where apps will be available for free to the public as a way to help them learn about the innovation economy." The following is the list of judges:

Judging criteria will include:

Submissions must be received before midnight Pacific Standard Time on November 6, 2009 and winners will be announced on November 10, 2009 at a CES Press Event in New York City. For those of you who will be submitting an application for the contest, I invite you to describe your application in the comment section below.

Going green used to be considered expensive and a luxury for those who could afford the trend. Now it appears that we are learning that not only is adopting more environmentally conscious attitudes good for our economic situation, but also our….health? Yes, if we dig a bit deeper we can see that dirty industries and backwards policy is actually harming the health of the earth for our children and the health of her inhabitants today.

There are two levels of health consequences associated with dirty industry, both direct and indirect. The direct consequences are examples like increased asthma rates in areas with high smog indices. Chlorofluorocarbon release into the atmosphere has shown to decrease the filter of direct sunlight on the planet, resulting in more concentrated ultraviolet light reaching the surface of the earth. Perhaps it is no surprise then that in countries with depleted atmospheric gas, skin cancer rates are among the highest in the world.

The indirect health consequences are harder to see immediately, but closer examination reveals that these are, in fact, perhaps the most hazardous. Bi-products of dirty and backwards industries, such as coal and oil processing, include cancer causing substances like asbestos and benzene. A U.K. study conducted in 2002 indicated that coal and oil industry workers are at a much higher risk of developing mesothelioma and leukemia.

Can we really afford to continue on the path we were on before? Investment in clean industry means not a healthier planet for our children and grandchildren, but also a healthier place for us to live today.

James O' Shea is a public outrach coodinator with the Syracuse, New York-based Mesothelioma and Asbestos Awareness Center (www.maacenter.org), the web's leading resource for asbestos exposure. The opinions expressed in this commentary are solely those of Mr. O'Shea.
Posted by Aaron Rose at 12:19 PM No comments: