Measuring the Impact of the Mobile Industry on Sustainable Development Goals

The GSMA released a study, 2016 Mobile Industry Impact Report: Sustainable Development Goals, that "offers critical insights into the transformative impact of the mobile industry on individuals, societies and economies around the world, in developed and developing markets. Importantly, it establishes a benchmark through which the industry will assess its success in contributing to the Sustainable Development Goals (SDGs) and serves as a blueprint for other industries as they commit to achieving the SDGs."

As explained in a press release dated Sept. 19, 2016, the report, which was developed by Deloitte for the GSMA, "is designed to facilitate progress reporting by creating a common, measureable system that links the industry's activities to their impact on the SDGs and will serve as an input into industry decisions on strategy, planning and investment." Furthermore, "The report will enable the mobile industry to engage more effectively with partners based on impact on the SDGs, and it creates a framework that can be shared with others in the mobile communications ecosystem, as well as with other industries. The Mobile Industry Impact Report forms a baseline to measure the industry's progress against the SDGs; updates will be published on a yearly basis."

The development of the report and its associated assets has four main objectives:
While the report is primarily focused on the assessment of impact across the SDGs, and the forward-looking implications of that analysis, there are three additional topics covered: 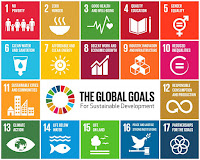 The report also notes that all 17 SDGs are impacted by the mobile industry to varying degrees, with the greatest impact being felt on: SDG 9: Industry, Innovation and Infrastructure; SDG 1: No Poverty; SDG 4: Quality Education; and SDG 13: Climate Action. The way the industry contributes across these four SDGs differs significantly:
Having spent my a good amount of my professional career supporting technology entrepreneurs, as well as advising the United Nations and sovereign governments on economic development matters, I understand the beneficial role mobile technology plays in improving the livelihood of billions of individuals worldwide. (This experience, coupled with my passion of creating technological tools for personal empowerment, is the catalyst that led to the formation of ROI3, Inc.) Therefore, I am pleased to see the publication of the 2016 Mobile Industry Impact Report, which comes at a point in human history when global mobile phone use is becoming ubiquitous. Measuring the impact of the mobile industry on the impact of SDGs is essential to achieving sustainable development goals in developed and developing markets.

What are your impressions of the report?

Aaron Rose serves as President and CEO of ROI3, Inc., a Seattle, Wash.-based company that empowers people in emerging economies through innovative, technology-based solutions. He is also the editor of Solutions for a Sustainable World.
Posted by Aaron Rose at 3:58 PM No comments:

"Seven billion people (95% of the global population) live in an area that is covered by a mobile-cellular network," according to a report titled ICT Facts and Figures 2016. Published annually since 2009 by the ITU, a United Nations specialized agency for information and communication technologies based in Geneva, Switzerland, this year's report provides statistical evidence of a digital divide that exists regarding access to affordable mobile broadband, as well as the widening gender gap of Internet penetration.

With respect to Long-Term Evolution, commonly marketed as 4G LTE, a standard for wireless communication of high-speed data for mobile phones and data terminals, "LTE networks have spread quickly over the last three years and reach almost 4 billion people today (53% of the global population), enhancing the quality of Internet use."

The digital divide remains a significant problem in 2016. The ITU claims that "close to one out of two people (47%) in the world are using the Internet but only one out of seven people in the LDCs. Developed regions are home to one billion Internet users, compared to 2.5 billion users in the developing world."

Not surprisingly, lower costs to access ICT services via mobile devices is a key driver to smartphone and LTE adoption, particularly in developing countries. "The average price of a basic fixed-broadband plan is more than twice as high as the average price of a comparable mobile-broadband plan," says the ITU. The report further explains that 83 developing countries had achieved the Broadband Commission's affordability target by end 2015. While five LDCs achieved the Broadband Commission target, broadband, fixed or mobile, remains unaffordable in a majority of the world's poorest countries.

For the first time, the ITU report provides statistical data regarding the Internet penetration rate for men and women. Disappointingly, "Internet penetration rates are higher for men than for women in all regions of the world." The report continues: "The global Internet user gender gap grew from 11% in 2013 to 12% in 2016. The gap remains large in the world's Least Developed Countries (LDCs) - at 31%. In 2016, the regional gender gap is largest in Africa (23%) and smallest in the Americas (2%)."

Also for the first time, the report provides statistical data on machine-to-machine (M2M) subscriptions as the Internet of Things (IoT) economy is beginning to accelerate. The report notes that "the countries with the highest M2M penetration rates are highly industrialized, advanced economies, including the Northern European countries of Sweden, Norway, Finland and Denmark."

What are your impressions of the ITU report?

Aaron Rose serves as President and CEO of ROI3, Inc., a Seattle, Wash.-based company that empowers people in emerging economies through innovative, technology-based solutions. He is also the editor of Solutions for a Sustainable World.
Posted by Aaron Rose at 5:35 PM No comments: