A Time for Greater Action Against Tuberculosis 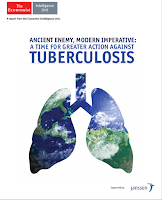 On Oct. 26, 2016, The Economist Intelligence Unit (EIU) announced the publication of a report that notes: Although tuberculosis (TB) "was responsible for around 1.5m deaths in 2014, down from nearly 1.8m in 1990, it is now the leading infectious disease killer worldwide, surpassing HIV/AIDS," according to the World Health Organization. The EIU report is intended to serve as an update to a 2014 report, Ancient enemy, modern imperative: A time for greater action against tuberculosis. This post, however, will focus on the 2014 report, which investigates the health challenge posed by TB and ways to improve the effectiveness of the global response to it. I will address the findings from the 2016 report in a subsequent post on this blog.

Supported by Janssen, the EIU's 2014 report "draws on interviews with 17 public health officials, funders, academic and medical experts, researchers, and activists as well as on extensive desk research to consider the state of the TB challenge, barriers to further progress, and how efforts need to evolve." The report's key findings include the following:
On the topic of improving success against TB will required changes on a number of levels, the report says that "further progress against TB is essential, but will mean new strategies that address current weaknesses while not throwing away gains to date." These new strategies include:
The 2014 report concludes by stating "TB strategies need to move in practice beyond medical silos to work in and with communities on finding cases and improving treatment outcomes. This involves a range of changes, including those listed below:
A video produced in conjunction with the 2014 report, which may be viewed below or through this link, correctly explains that "combating tuberculosis globally required finding and treating people where they live, involving the health system as a whole, and harnessing cost-effective technology."

Aaron Rose is an advisor to talented entrepreneurs and co-founder of great companies. He also serves as the editor of Solutions for a Sustainable World.
Posted by Aaron Rose at 6:50 PM No comments:

The previous post on this blog made reference to a 2015 report produced by GSMA Intelligence that provided an analysis of the mobile industry in the Arab States. On Oct. 17, 2016, the London, England-based organization announced the publication of The Mobile Economy: Middle East and North Africa 2016 at the GSMA Mobile 360 Series – Middle East conference in Dubai. In its press release, the GSMA says "that there are 339 million unique mobile subscribers (Q2 2016) across the region's twenty five markets, a figure expected to rise to 385 million by 2020."

The report further explains: "The number of smartphone connections has also more than doubled over the last three years to reach 263 million in Q2 2016, accounting for 42 per cent of total connections, and is forecast to reach 467 million by 2020. The availability of mobile broadband networks has increased smartphone adoption and is helping to bridge the digital divide and usher in innovative new mobile services." The availability of mobile broadband networks in the Middle East and North Africa (MENA) region provides an opportunity for companies like ROI3 to develop localized content for smartphone users.

On the topic of mobile delivering economic growth, the GSMA 2016 report notes that "mobile technologies and services generated 4% of GDP in the MENA region, a contribution that amounted to more than $150 billion of economic value. In the period to 2020 this will increase to almost $200 billion (4.2% of GDP) as countries benefit from the improvements in productivity and efficiency brought about by increased take-up of mobile services."

Moreover, "The mobile ecosystem also supported more than 1 million jobs in 2015. This includes workers directly employed in the ecosystem and jobs indirectly supported by the economic activity generated by the sector. In addition to the mobile sector's impact on the economy and labor market, it also makes a substantial contribution to the funding of the public sector, with $15 billion raised in 2015 in the form of general taxation."

Over the past several years, I have witnessed the power mobile connectivity has played in Asia's emerging economies. Therefore, it is with great interest to read that "mobile has emerged as the platform of choice for creating, distributing and consuming innovative digital solutions and services in MENA. Many local and global innovators and tech entrepreneurs are now using the expansion of the mobile ecosystem and the growing adoption of smart devices in the region to deliver mobile-based solutions that directly appeal to local interests and cultures."

My colleagues and I recognize that the successful creation and deployment of localized mobile software solutions in the MENA region will be based on establishing strong collaborative relationships with local developers, marketers, and channel partners.

What advice do you have about doing business in the MENA region?

Aaron Rose is an advisor to talented entrepreneurs and co-founder of great companies. He also serves as the editor of Solutions for a Sustainable World.
Posted by Aaron Rose at 2:12 PM No comments:

Doing Business in the UAE: An Opportunity to Develop Localized Mobile Content for Arabic Speakers?

Produced by GSMA Intelligence, The Mobile Economy Arab States 2015 report says: "A factor preventing smartphone users [in the Middle East] buying apps is the lack of apps in Arabic language. Arabic is the fifth language in the world by number of native speakers and is the first language for more than 240 million people. Nevertheless, less than 1% of websites in the world are in Arabic. Creating local Arabic content requires local talent, so there is clearly an opportunity for local developers, local service providers and local entrepreneurs to develop apps that meet the needs of these customers." My professional interest in producing localized content for Arabic speakers was the primary reason I attended the "Business and Trade Opportunities with Jebel Ali Free Zone (Jafza), Dubai" seminar on Sept. 27, 2016 in Seattle, Wash.

Jafza, a DP World-owned company, is based in Dubai, United Arab Emirates and promoted as one of the world's leading free trade zones. Created in 1985, a"the free zone's purpose is to promote trade and support container throughput at the Jebel Ali Port," according to a promotional materials produced by the based organization. "Jafza accounts for almost 32% of total FDI (Foreign Direct Investment) flow into the country. The free zone contributes 21% of Dubai's GDP on a yearly basis and it sustains the employment of more than 144,000 people in the United Arab Emirates. In 2015, Jafza generated trade worth USD 87.6 billion."

Speakers at the seminar noted that the United States has enjoyed warm relations with the UAE since 1972 and the U.S. was the third country to establish formal diplomatic relations with the UAE. With respect to international trade, the UAE is the United States' single largest export market in the the Middle East. Over 1,000 American firms have an on-the-ground and expanding presence in the UAE. FedEx, Ford, GM, and General Electric are among the Fortune 500 companies operating in Jafza.

The seminar explained some of the value-added services and incentives for companies to locate in Jafza including: 100 percent foreign ownership, no corporate or income taxes, no import import or re-export duties, no restriction on capital repatriation and no currency restrictions. Covering 22 square miles, Jafza can provide businesses with plots of land, warehouses, a business park, and on-site residences.

I enjoyed attending the seminar, which was hosted by the Trade Development Alliance of Greater Seattle, and learning about the opportunities that exist for American firms. However, the focus of the presentations was on products rather than services such as cloud computing or information technology such as software-as-a-service, the latter of which is the primary focus of ROI3, Inc. During the Q&A session, there was some discussion about UAE's planned effort to support local entrepreneurship and the creation of small businesses.

The GSMA report referenced in the first paragraph above explains that "the mobile industry in the Arab States has grown rapidly over the last few years, with 54% of the population subscribed to a mobile service as of mid-2015. At this point, the unique subscriber base in the Arab States stood at just over 200 million." Given that just 1% of websites in the world are in Arabic, entrepreneurs and small businesses in the UAE are presented with a great opportunity to develop localized mobile web content. My colleagues and I look forward to having the opportunity to develop mobile software solutions for Arabic speakers, particularly in the education and health sectors.

What has been your experience of doing business in the UAE?

Aaron Rose is an advisor to talented entrepreneurs and co-founder of great companies. He also serves as the editor of Solutions for a Sustainable World.
Posted by Aaron Rose at 3:21 PM No comments: