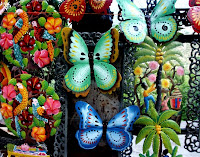 Haïti is full of talented internationally renowned artists and some of the most beautiful artwork found in the Caribbean from paintings and beadwork to steel oil drum sculptures and hand sewn accessories. The innovative recycled steel oil drum sculptures are some of most popular and unique pieces found in Haïti. Used 55-gallon oil drums are purchased from the port and transported to Croix-des-Bouquets, Haïti, a small town with the largest concentration of steel oil drum metal artists resides located just 45 minutes outside of the capitol, Port au Prince. The art form started in the mid 20th century by blacksmith, Georges Liautaud, from Croix-des-Bouquets. (Photo of roadside stand of painted recycled steel oil drum sculptures in Petionville, Haïti courtesy of Alyssa Johnson) 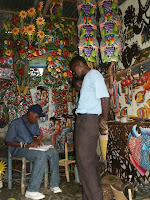 Artists start with old oil drums and remarkably, they use every piece of the oil drum used in different art pieces including the cap and edges. Several homes and workshops in Croix-des-Bouquets are lined with fences made from unused edges of the oil drums. (Photo of Jean Emelie and Jean Pierre Richard negotiating a metal art purchase in Cap-Haïtian, Haïti courtesy of Alyssa Johnson)

The drums are stuffed with straw or banana leaves and lit on fire to burn off the residues. Once cooled off, the flattened drum becomes a rectangular sheet approximately four by six foot wide. They are flattened and designs are chalked out on and then cut out with a mallet and chisel. Different textures sculptures are created by hammering in "bumps" of different heights. Some are finalized with brightly painted designs, others are left in raw form. 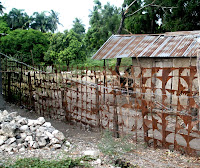 In a country where, according to the U.S. Central Intelligence Agency's World Factbook, 80 percent of the population live under the poverty line and 54 percent in abject poverty, this small art industry has allowed families to build their own businesses, export internationally and earn higher wages. Formal unemployment in Haïti, the Western hemisphere's poorest nation is at approximately 66 percent. This labor intensive art form allows skilled craftspeople to earn fair wages in Haïti and makes a direct positive impact of poverty alleviation. (Photo of remnants of the oil drums are used for fencing in Croix-des-Bouquets, Haïti courtesy of Alyssa Johnson)

Alyssa Johnson is founder of A Splash of the Caribbean, a Seattle-based unique triple bottom line Caribbean art import company that supports artists by purchasing directly and selling online and at restaurants such as La Isla and Casuelitas Caribbean Café, among others throughout the Puget Sound region. Ms. Johnson may be contacted at oroazulllc@gmail.com. (Photo of the Musical Mermaid Screen by Atelier D’Art of Croix-des-Boquets, Haïti is courtesy of Alyssa Johnson. In Haïtian culture, the mermaid depicts La Siren, the Vodou spirit or lwa with power under the sea who enchants sailors with the melodies of her trumpet.)