All Nonprofits Helping Haïti are Not the Same

It has been one week since a massive earthquake shook the Republic of Haïti, which has killed an estimated 200,000 people and left 1.5 million homeless. It is with great sorrow that this entry follows the previous two entries outlining excellent examples to facilitate sustainable development in Haïti through innovation initiatives. While I am following the rescue and recovery efforts closely, I am also amazed by global response in financial contributions to assist the Haïtian victims. I commend the overwhelming positive response from people worldwide, but we must also be mindful to which charities to support and that our generous donations are properly allocated.

According to The Chronicle of Philanthropy article dated January 18, 2010, donors have contributed more than $210 million to major U.S. relief groups within six days after the massive earthquake struck Haïti. Despite the troubled economy, “The pace of giving for Haiti is running ahead of the amount donated in the same period after the Asian tsunamis in 2004, but slower than the outpouring of gifts after the flooding caused by Hurricane Katrina in 2005. In the six days after the flooding started in New Orleans, Americans gave at least $457-million for relief efforts. In the nine days after the Asian tsunamis, major U.S. relief groups raised $163-million.”
In PBS Newshour’s Ray Suarez interview on January 18th with Stacy Palmer, Editor of The Chronicle of Philanthropy, Ms. Palmer discusses what questions a donor should ask about a nonprofit organization when considering making a financial donation. “One of the most important things to look at is, does the charity have experience working in a place like Haiti? And that's the most important research thing you can do. Have they already done things? Do they have a track record?”
Ms. Palmer then talked about the importance of a nonprofit’s experience and accomplishments. “There are plenty of Web sites that say, how much overhead cost does the charity provide? But, really, you want to look at results. What is it that the charity has accomplished? Have they been there before? This is not a tragedy where people can just come in and parachute in and do good, no matter how experienced they are. They have to have relationships with the community. And that's probably the most important thing that experienced aid workers say to look at.”
Donors should also question organizations who claim 100 percent of your donation goes to the charity. “Sometimes, that is too good to be true,” says Ms. Palmer. “And links in e-mail, people you don't know, go to the Web site, Google it yourself. A lot of people try to do copycat kinds of things. They will play on the name of the charity. So, be very careful about that. Do your research. And if you're being pressured into giving, don't give. That's a sign, again, of a charity that's not doing the right thing.” Ms. Palmer’s interview in its entirety may be found in the video below:

Recognizing my professional experiences in Haïti, many people have asked for my recommendation on which organizations to support. The American Institute of Philanthropy (AIP) posted its top-rated list of charities involved in Haitian earthquake relief efforts. While not on the AIP list, I highly recommend the Florida Association for Volunteer Action in the Caribbean and the Americas, Inc. (FAVACA), a Florida-based nonprofit organization serving the needs of the people in Haïti and throughout the Caribbean for over 25 years. Funds raised will go to support medical programs, disaster assistance, recovery and rebuilding programs in Haïti.
I am pleased to announce that I am participating in a fundraising event on January 21, 2010 hosted by Casuelitas Caribbean Café in Seattle, Washington. Casuelitas will be serving spicy Caribbean bites and Haïtian Rum Punch with 100 percent of the profits from food and beverage sales going to FAVACA for Haïti earthquake relief. 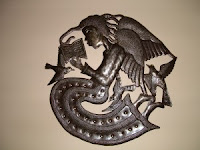 A Splash of the Caribbean, a Seattle-based unique triple bottom line Caribbean art import company that supports artists by purchasing directly and selling online and at restaurants throughout the Puget Sound region, will feature a Haïtian Steel Oil Drum Art Sale with 50 percent of net proceeds going to Haïti earthquake relief. Click here to view the official press release for the fundraising event. (Photo coutesy of Alyssa Johnson/A Splash of the Caribbean)
Why FAVACA? I have a relationship with the organization's executive staff and board of directors and as I stated above, the nonprofit organization has 25 years of working in Haïti. During these years, FAVACA has established a strong track record in delivering tangible results to thousands of underserved people. Having advised FAVACA on fundraising and strategic planning strategies, I am familiar with FAVACA's financial statements and I can attest that the nonprofit organization has kept their overhead expenses to a minimum leaving a large majority of funds raised to be used on effective programming.

For those who reside outside of Seattle, you can donate directly to FAVACA at http://www.favaca.org/?q=node/30. Thank you for your support.
Posted by Aaron Rose at 2:47 AM