Abraham Lincoln: A Model of a Great Statesman 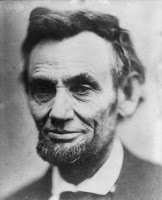 Today, February 12, 2009, is the bicentennial of Abraham Lincoln's birthday. At a time when many nations lack political leadership, I think it is prudent that the world examine the life and philosophy of the 16th President of the United States. President Lincoln's vision for overcoming the challenges and bridging the differences that sparked the Civil War may be applied to nations grappling with their respective conflicts.

Just as the Civil War impacted millions of Americans in the 19th Century, military and civil conflicts in our modern era will continue to leave a trail of destruction on innocent lives, social structures, and economic markets. There are several lessons that leaders of nations -- nations where war and strife is interwoven into the daily lives of its citizens -- can learn by reading President Lincoln's Second Inaugural Address.

Regardless of how unnecessary or unjust, nations will continue to engage in military and civil conflicts. The Second Inaugural Address provides a framework of reconciliation that is often missing in post-war reconstruction. Similar to preventing conflict, it is equally important to implement a post-war nation-building plan. President Lincoln's reconstruction plan, which was never fully implemented because of his assassination, realized that post-war rehabilitation of the United States began with community redevelopment.

Many people are familiar with The Gettysburg Address, which President Lincoln delivered at Gettysburg, Pennsylvania on November 19, 1863. It is The Gettysburg Address' last sentence that applies to certain nations today that are rebuilding from years of civil war, "It is rather for us to be here dedicated to the great task remaining before us -- that from these honored dead we take increased devotion to that cause for which they gave the last full measure of devotion -- that we here highly resolve that these dead shall not have died in vain -- that this nation, under God, shall have a new birth of freedom -- and that government of the people, by the people, for the people, shall not perish from the earth."

I have visited too many countries where people that still harbor grudges against their fellow countrymen about past conflicts. Abraham Lincoln's philosophy should be used as a model to look beyond each other's differences and focus on the individual aspects that make us equal.

If you visit Washington, D.C., in addition to the numerous wonderful monuments and museums, I highly recommend spending time at the Lincoln Memorial. By the way, here is another great use of mobile technology directly related to the Lincoln Memorial. The National Park Service (NPS) with support from Eastern National, a cooperating association of the NPS, offers free interpretive Ranger talks via telephone. According to a NPS press release, "These new Lincoln Memorial talks are organized around many themes including, 'The Gettysburg Address', 'Debunking the Myths of the Lincoln Memorial', and the 'Life and Times of Lincoln the Man'. Ranger talks can be heard by dialing (202) 747-3420."
Posted by Aaron Rose at 11:17 AM