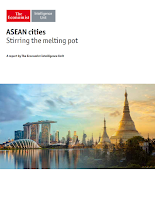 Despite economic headwinds certain global markets are facing, I remain encouraged by the economic growth projections of the ten nations that comprise the Association of Southeast Asian Nations (ASEAN). This is a topic that I have been tracking for the past few years, Therefore, I found particular interest in a whitepaper, ASEAN Cities – Stirring the melting pot, produced by the Economist Intelligence Unit (EIU) that says: "In a world struggling with low growth, the ten member states of the Association of South-East Asian Nations (ASEAN) represent a genuinely exciting prospect among emerging markets." Moreover, the EIU "expects growth in the region, already the world's sixth largest economic bloc, to average 4.6% annually in the next five years. Much of this growth will come from ASEAN's urban hubs: the region currently has around 50 cities with populations of over 500,000, which will continue to drive an overwhelming share of its economic development in the next decades."

The whitepaper correctly asserts that ASEAN, with a population of 626 million according to the US-ASEAN Business Council, represents "a powerful economic bloc." Supporting this claim, the report says ASEAN is the sixth-largest economy in the world with a combined GDP of US$2.4trn. The report, however, importantly recognizes that ASEAN "includes economies with vastly different profiles: GDP per capita in its wealthiest member, Singapore, is over 50 times higher than that of its poorest member, Myanmar. At the same time, Singapore's population of 5.5m is only a small fraction of that of Indonesia, which, with a population of 250m, is the region's most populous nation and its single largest economy (see Figure 1)."

Encouragingly, "despite these differences, the EIU forecasts that the region's growing economic integration, aided by ASEAN-led initiatives, will pay off to see it expand by 5% a year on average over the next five years."

The EIU's analysis further explains that "the main 50 cities with populations of over 500,000 people in ASEAN are the ones that are driving an overwhelming share of the bloc's economic development. Urbanization is well known to result in productivity benefits, led by its ability to agglomerate knowledge, resources, ideas, innovation and different cultures. Cities profit from this cluster effect to form highly concentrated and efficient economic powerhouses. About two-thirds of a city's economic growth and competitiveness are determined by its population flow."

Having traveled to ASEAN's key economic hubs such as Bangkok, Ho Chi Minh City, Jakarta, Kuala Lumpur, Manila and Singapore, I can attest that "ASEAN cities are still young and evolving rapidly, and the importance of migration—internal, rural-to-urban and external—cannot be ignored."

The purchasing power of individuals residing in ASEAN's urban areas will continue to rise. "Over the coming years the EIU expects incomes to grow at marginally faster rates in rural areas than in cities, where labor markets are comparatively tighter, although this faster growth will be from a lower starting base."

I am bullish about the business opportunities that exist for companies looking to expand into ASEAN. In particular, I see significant opportunities for those companies creating products or services that target the interests of a growing middle-class. These products or services include education technology, mobile health, self-driving technology, smart energy, eCommerce and enterprise solutions, and home entertainment.

Do you agree with the findings of the EIU report? Are you currently or planning to do business in ASEAN?

Aaron Rose is an advisor to talented entrepreneurs and co-founder of great companies. He also serves as the editor of Solutions for a Sustainable World.
Posted by Aaron Rose at 12:05 AM