The following is a guest post by Alexander Brooks


We live in a society that creates a constant flow of information streams whether online or television. Being able to decipher the difference between credible and fake information is becoming increasingly hard. Last month I had the privilege to have a guest speaker at my Data Science in Action Meetup that built a site that identifies fake news. Today we’re going to discuss some of the highlights of Zach Estela's site and tool areyoufakenews.com.

Goal of The Tool


The main goal Zach set out to achieve was seeing if there would be an unbiased way to analyze online news and categorize into the fake or real news section. In order to identify fake news, he first needed to define what equates to real versus fake. Once he created labels and conditions for the tool to look for next was testing and visualizing the discoveries. Below I attached a snapshot of Machine Learning tool at work. 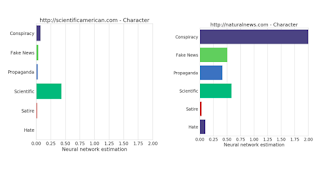 
There were several tools involved in this project to make things possible. Zach created a custom built a neural network to do the heavy lifting through the text. The text labels used to create the categories are stored in MongoDB. This tool effortlessly runs through 3,000 news sites and 100,000 articles to provide you with an analysis of what's real or fake news.

This was a great experimental project to build but there were challenges involved. Being bias can be viewed as subjective to a personal opinion. Everyone has their idea of what can be considered fake news and it's hard to go in one direction without making the other party disagree. Despite the challenges of building such a tool, Zach plans to continue the development.

Alex Brooks is the founder and CEO of AE Brooks, LLC (dba Entreprov), a Seattle-based firm that helps small and medium-sized businesses increase their customer base and extend lifetime value of current customers through machine learning and business strategy. Mr. Brooks may be contacted at alexb@entreprov.com.
Posted by Aaron Rose at 1:18 PM