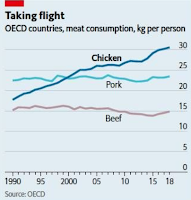 Having dined in restaurants from Afghanistan to Uruguay, Brazil to Vietnam, and many points in between, the most common item found on the menu is Gallus gallus domesticus. In its Jan. 17, 2019 issue, The Economist published an article on how chicken became the world's most popular meat. "The chicken industry is a dirty business, but it is also a profitable one. In the OECD, a club of mostly rich countries, pork and beef consumption has remained unchanged since 1990. Chicken consumption has grown by 70% (see chart)."

Moreover, "It is not just fussy Western eaters who increasingly favor chicken. Rising incomes mean that demand for the meat is growing even faster in poorer countries. As a result, chickens are now the world's most widely traded meat. In economic terms they are, in effect, the opposite of cars. They are produced whole. But their value is maximized once they are broken up.

"Though westerners prefer lean, white meat; many in Asia and Africa prefer dark meat, which includes legs and thighs. These preferences are reflected in local prices: in America breasts are 88% more expensive than legs; in Indonesia they are 12% cheaper. Differences in the price of chicken feet are even starker. The thought of eating talons is abhorrent to many Westerners, but they often feature in Cantonese recipes. China now imports 300,000 tonnes of 'phoenix claws' every year."

Poor food security in industrial and developing countries alike, however, have been well documented over the past several years. Fred de Sam Lazaro, director of the Under-Told Stories Project at the University of St. Thomas in Minnesota, and a special correspondent for the PBS NewsHour, produced a report explaining that "viruses like Avian flu, Ebola and Marburg often fester in animals before moving into human populations. Animals in regions that are geographically remote present particular challenges for disease containment. But in Thailand, local residents are using technology, including digital scanning, to track animals and stop outbreaks before they start."

As Mr. de Sam Lazaro notes: "There are more chickens than people in remote Thai villages like Huay Ton Chok, and people do worry when their chickens stop crossing the road. That's because, five years ago, this village suffered an outbreak of flu-like disease that killed hundreds of birds. So when farmer Udom Putipatharakal thought one of his chickens wasn't doing well and another looked really ill, he reported it."

"For four years," according to Mr. de Sam Lazaro, "Pariwat Roomak has been dispatched from the local health department, responding to calls about sick animals in the area."


Pariwat enters all of this information into an app on his smartphone and transmits it directly to the local government health office, the veterinary department and to a major university to be analyzed. It's part of a participatory One Health disease detection program, more simply called PODD. And it has become a model for programs like this all over the world. It's villages like this one that scientists fear could be the cradle of the next superbug, one that can jump from animal to human, and then mutate so it can leap from human to human. So the objective of this exercise is to track every diseased animal, particularly chickens, so as to contain an outbreak before it becomes a pandemic.

According to Jarwan Chaicom, who heads the local health department for this region in Thailand, "Before we adopted the system, the villagers didn't have a way to connect with each other or with us. The local government is quite far away from them. Language is another barrier, because we have seven ethnic groups and seven languages in this area."

A smartphone app developed for the program translates those languages, so all the responders can track where the diseases are occurring. Patipat Susumpow leads the firm that designed the app. It had to be simple. "The penetration rate of smartphone is not really high in those communities," says Mr. Susumpow. "So most of our volunteers either never used a phone before or used like a very simple phone."

In the case of documenting the ill chicken in Huay Ton Chok, Mr. de Sam Lazaro reports the next stop for the diseased bird was a two-hour bus ride to Chiang Mai University where "scientists determine the type of disease, the likely cause, and, accordingly, recommend action to prevent its spread, whether it's administering antibiotics to animals or disinfectant spraying."

By utilizing mobile technology, Mr. Susumpow adds: "We hope the app can be the placeholder for democratizing the power of response and disease management back to the community."

Click here to watch the video or read the transcript of the PBS NewsHour segment.

What mobile applications are you seeing that are helping to document occurrences of infectious diseases?

Aaron Rose is an advisor to talented entrepreneurs and co-founder of great companies. He also serves as the editor of Solutions for a Sustainable World.
Posted by Aaron Rose at 2:02 AM