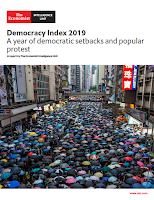 In a previous post on this blog, I present a number of criteria such as security, political stability, government effectiveness, legal and regulatory, and tax policy to consider when choosing an export market for your product. Having worked in industrialized and developing countries worldwide, I can attest that the strength of these items often correlates to the openness and fairness of the country's institutions. Therefore, if you are considering expanding to a market outside of your home country, I recommend reading The Economist Intelligence Unit's Democracy Index, which "provides a snapshot of the state of democracy worldwide in 165 independent states and two territories. This covers almost the entire population of the world and the vast majority of the world's states (microstates are excluded)."

The EIU's 12th edition of the Democracy Index records how global democracy fared in 2019. "The Democracy Index is based on five categories: electoral process and pluralism; the functioning of government; political participation; political culture; and civil liberties. Based on its scores on a range of indicators within these categories, each country is then itself classified as one of four types of regime: 'full democracy.' 'flawed democracy,' 'hybrid regime' or 'authoritarian regime.'"

According to The EIU's measure of democracy, "almost one-half (48.4%) of the world's population live in a democracy of some sort, although only 5.7% reside in a 'full democracy,' down from 8.9% in 2015 as a result of the US being demoted from a 'full democracy' to a 'flawed democracy' in 2016. More than one-third of the world's population live under authoritarian rule, with a large share being in China."

What is more, "The decline in the average global score in 2019 was driven by a sharp regression in Latin America and Sub-Saharan Africa, a lesser one in the Middle East and North Africa (MENA) region, and by stagnation in the remaining four regions covered by the Democracy Index. Latin America was the worst-performing region in 2019, recording a fall of 0.11 points in its average regional score compared with 2018, to 6.13. Starting from an already low base, the regression in Sub-Saharan Africa was also striking: the average regional score fell by 0.10 points year on year, to 4.26. The democratic deterioration in the MENA region was more modest but followed a trend of steady regression that started in 2012, when the gains of the Arab Spring began to be reversed."

Slightly more positive, however, the EIU says "three regions stood still in terms of their average scores, as gains in some countries and categories were erased by setbacks in others. Asia and Australasia and eastern and western Europe all failed to make headway in the Democracy Index in 2019. The exception to the regression rule in 2019 was North America (Canada and the US), whose average regional score moved up by 0.03 points because of a modest improvement in Canada's score."

In 2019 some 68 countries experienced a decline in their total score compared with 2018, but almost as many (65) recorded an improvement. The other 34 stagnated, with their scores remaining unchanged compared with 2018. There were some impressive improvements and some dramatic declines ... with Thailand registering the biggest improvement in score and China the greatest decline. There were ten changes of regime category, six of them positive and four negative. Three countries (Chile, France and Portugal) moved from the "flawed democracy" category to be classified as "full democracies." Malta moved in the opposite direction, falling out of the "full democracy" category to become a "flawed democracy." At the other end of the democracy spectrum, Iraq and Palestine moved from being classified as "hybrid regimes" to "authoritarian regimes." Algeria moved from being classified as an "authoritarian regime" to the "hybrid regime" category. El Salvador and Thailand moved out of the "hybrid regime" category into the "flawed democracy" category, while Senegal moved in the opposite direction, from being a "flawed democracy" to a "hybrid regime." 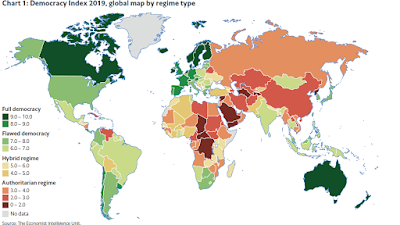 Many companies will find it easier to conduct business in those countries that rank high in the Democracy Index. A country that is able to attract inward foreign direct investment will find it easier to build a strong infrastructure of schools, transportation networks, and hospitals, and train their citizens to work jobs that pay a living wage, which in turn will increase consumerism and tax revenue. I am hopeful those countries at the bottom half of the Democracy Index will implement necessary reforms to climb up the scale.

Do you find this report useful in choosing your export market?

Aaron Rose is a board member, corporate advisor, and co-founder of great companies. He also serves as the editor of Solutions for a Sustainable World.
Posted by Aaron Rose at 3:12 AM