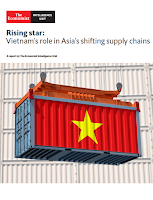 According to a report published by The Economist Intelligence Unit (The EIU), "Vietnam has received increasing attention as an alternative manufacturing hub to China amid the US-China trade war. However, its rise as a low-cost manufacturing base in Asian supply chains predates these more recent international tensions. Among many aspects, its appeal to investors owes much to the country's internal political stability in recent decades. This is in contrast with many of its regional neighbors, which, while able to offer low-cost labor, have suffered policymaking instability and intermittent breakdowns in relations with major countries."
Rising star: Vietnam's role in Asia's shifting supply chains takes an in-depth look at the strengths and weaknesses of Vietnam's business environment, focusing on three key areas: labor, investment incentives and trade relations. The EIU also benchmark the country's business environment ranking against its regional counterparts, providing a realistic view of Vietnam as an investment destination. 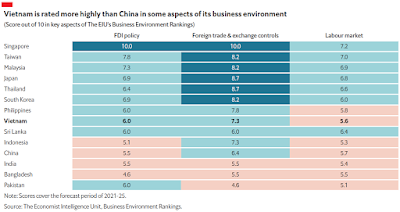 The EIU expects Vietnam's upcoming leadership transition, at the 13th National Congress of the Communist Party of Vietnam scheduled for Jan. 25th-Feb. 2nd, 2021, "to proceed smoothly and put in place another administration committed to policy continuity in regards to foreign investment and the improvement of the business environment. The report further says, "This is not to say that Vietnam is not without major obstacles to doing business—for one, corruption among public officials remains a major issue. However, the assurance of overall political stability, means that other elements of the business environment are of more immediate concern: what are Vietnam's current key advantages over regional competitors and how will these evolve over time?"
An analysis of the three areas in Vietnam's business environment that have contributed the most to its competitiveness as a manufacturing hub—labor, investment incentives and trade relations, "will help investors and supply chain managers to understand Vietnam's potential compared with the wider region":

The Association of Southeast Asian Nations (ASEAN), EU-Vietnam Free Trade Agreement (EUVTFA), Comprehensive and Progressive Agreement for Trans-Pacific Partnership (CPTPP), Regional Comprehensive Economic Partnership (RCEP) are all free-trade agreements where Vietnam is a member, giving the country entry to many of the world's largest economies. During a webinar about the report, Divya Sangaraju, a research analyst at The EIU, said that participation in these trade agreements provides favorable access (i.e, low or no-tariffs) for Vietnam's manufacturing and export-oriented firms who want to access larger markets.
While there are many positive attributes to doing business in Vietnam particularly in the electrical machinery sector, which is the country's largest export sector, businesses and investors should proceed with caution. The report asserts that "Whilst continuity in policymaking and favorable international relations will be reassuring to business, Vietnam will not be free from operational risks. For instance, there is potential for unintended consequences from the government's efforts to maintain international competitiveness. The risk of Vietnam being reprimanded by Western countries (including more severely than we currently expect by the US) for limiting the appreciation of its local currency could partially jeopardize the tariff-free access it has to major markets. Moreover, efforts to keep wage costs low for foreign enterprises via modest minimum wage increases and limited mandatory employee benefits could stoke disquiet, which could later develop into labor protests." 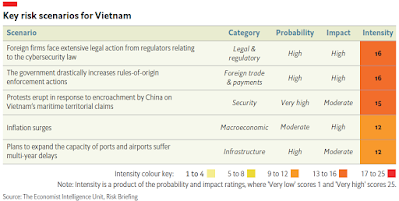 Is Vietnam a market you are currently operating in? If so, what benefits and risks have you identified in doing business in the Southeast Asia nation?
Aaron Rose is a board member, corporate advisor, and co-founder of great companies. He also serves as the editor of GT Perspectives, an online forum focused on turning perspective into opportunity.
Posted by Aaron Rose at 8:21 PM