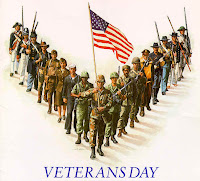 Today, November 11, 2008, is Veterans Day in the United States (or Armistice Day worldwide) and I want to thank all the men and women who served to protect our freedom. I was reading an Associated Press article, "Today's veterans hall a mouse click away," which made me think about how technology plays an important role for the military not just during a combat situation, but those who are returning from a war. We are just learning to understand the benefits of online social networking sites such as Facebook and MySpace, but Community of Veterans was created through a joint effort of the Iraq and Afghanistan Veterans of America (IAVA) and the Ad Council. This social networking website provides an online community for veterans who served in Iraq and Afghanistan.

Community of Veterans helps veterans connect online and share their experiences with people whom they can best relate - other veterans. My friends who served in the military say one of the largest challenges for a soldier returning from combat is the sense of isolation. Websites like Community of Veterans and others being planned by organizations such as Veterans of Foreign Wars (VFW) and the American Legion will offer an online social networking community to help veterans heal their physical or emotional wounds resulting from serving in a war. We can see the physical wounds of veterans returning from Iraq and Afghanistan, but we are often unaware of the mental and emotional toll that results from having exposure to a combat situation.

My grandfather, Dale Taylor, was proud of his military career serving in the U.S. Air Force and through all the war stories he proudly told (he was serving at Pearl Harbor on December 7, 1941), only once did I hear him talk about the emotional effects of war. It was not during one of our conversations, but one with his younger brother, James Taylor, who also served in the Air Force. Online social networking has made great strides in connecting people into difference communities and I hope this technology will connect veterans into a community that provides support for each other. Thank you to all veterans who served to protect our freedom.
Posted by Aaron Rose at 10:15 AM