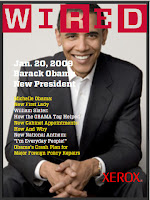 Almost a week has passed since Senator Barack Obama was elected as the 44th president of the United States of America. As Mr. Obama begins his transition from senator to president, Americans, and all the world, will be watching closely how he will implement all his changes. One thing is for certain, the president-elect will use technology unlike any preceding president and he is expected to be the first US Tech President ("Obama expected to be first US 'tech President'").

Mr. Obama used non-traditional methods such as the Internet and text messaging to fundraise and organize volunteers, although there are differing opinions as to its effectiveness. Senator John McCain had a well-designed website, but he used more traditional methods of communications ("Tech Weekly: How technology helped win it for Obama"). To many Americans, Mr. Obama appeared more "in touch" with the future and the ability to lead the United States through several difficult issues.

One of the many criticisms of George W. Bush's administration is the lack of transparency in its operations including methods of executive management and process of policy formation. An advantage of technology is the ability to decimate information to a large audience and engage their participation. As we witnessed during eight years of President Bush's tenure, however, technology can be used to restrict accessibility to information. I hope that an Obama White House will use current and yet to be developed technology to engage the populous. Voting is one way for citizen participation in American democracy, but elected leaders need to improve upon engaging their constituents in being a part of the solution to various issues. Technology will help facilitate this engagement and the recent launch of change.gov sponsored by the Obama-Biden Transition Project is a good start.

Similar to using technology to help resolve some of the world's most difficult socioeconomic issues in developing markets, countries like the United States must use technology innovation to help resolve the current economic crisis and improve education for the next generation. Mr. Obama has a monumental task and I wish him the best of luck. However, the president-elect and his incoming administration cannot do it alone and I encourage the White House to use the latest technology to tap into the innovative knowledge Americans possess. Doing so will be a true testament to citizen engagement, which is something that people desire and has never been available until now.
Posted by Aaron Rose at 7:16 PM