The Need for Comprehensive Sex Education in the U.S. and Worldwide

In less than 24 hours, Barack Obama will become the 44th President of the United States and it is anticipated that he will reverse some policies his predecessor, George W. Bush, implemented during the past eight years. One change that should be made is how sex education is taught in U.S. schools and the American financial support of HIV/AIDS prevention programs abroad. A comprehensive sex education curriculum rather than an abstinence-only-until-marriage curriculum, should be implemented in schools throughout the United States. This strategy should incorporate the benefits of abstaining from sex, but also provide advice to young people about using contraceptives if they do engage in sexual activity. (Photo courtesy of Jay Friedman)

Although I am not a health professional or an expert in sex education, I certainly agree that abstaining from sex is effective in preventing sexually transmitted diseases (STDs) including HIV/AIDS and teen pregnancy. George W. Bush implemented an abstinence-only sex education strategy, which according to the National Abstinence Education Association, "Abstinence-centered education programs teach teens medically accurate information about pregnancy prevention, STDs, HIV/AIDS and contraception, all within the context that abstaining is the only way to completely avoid the physical and emotional risks of casual sex."

As much as we would like teens to wait until they are physically and mentally ready to engage in sexual activity, the reality is many will do so whether they are ready or not. Ideally, parents should be teaching their children the risks of sexual activity, but many parents find the topic uncomfortable. Providing teens with the knowledge about engaging in sexual activity is as necessary as giving teens advice on picking a suitable college or university, how to find a good job, and the means to become financial responsible. All of these issues affect not just the individual, but poorly-made decisions adversely affect the community. It is for the benefit of society that comprehensive sex education is taught in our schools.

Regarding American support of international HIV/AIDS prevention programs, I have friends who teach in schools located in Africa, Latin America, and Asia where most students come from 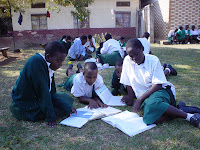 poverty-stricken families. During George W. Bush's presidency, American financial support of HIV/AIDS prevention programs in developing nations required that these programs implement an abstinence-only sex education program. Many people who are directly affiliated with these programs or schools that teach sex education argue that an abstinence-only sex education is ineffective when it comes to preventing HIV/AIDS or teen pregnancy. (Photo was taken during one of my trips to St. Theresa Girls Secondary School Bwanda, a private school located in Masaka, Uganda for girls 14-20 years of age.)

As President-elect Obama prepares to make decisions domestically and internationally, addressing HIV/AIDS prevention will rank high on his administration's agenda. Mr. Obama has pledged to invest into the country's physical infrastructure such as updating schools with the latest information technology platforms and making schools more energy efficient. Equally important is the need to modernize school curriculum, particularly in sex education.

For your reference, I recommend that you read an interesting article in the January 2009 edition of The Washington Diplomat, "Birds and Bees Are Back," written by Dena Levitz. This article is about how schools in Maryland’s Montgomery County and the District of Columbia have added a comprehensive sex education to its sexual health curriculum.
Posted by Aaron Rose at 11:17 AM