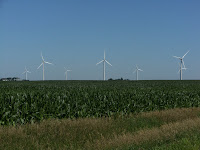 On July 20, 2010, through its official blog, Google announced it “just completed a substantial 20-year green Power Purchase Agreement that allows us to take responsibility for our footprint and foster true growth in the renewable energy sector. On July 30 we will begin purchasing the clean energy from 114 megawatts of wind generation at the NextEra Energy Resources Story County II facility in Iowa at a predetermined rate for 20 years.” This deal is the first by Google Energy LLC, an entity formed in December 2009 that allows Google to procure large volumes of renewable energy by participating in the wholesale market. This is a significant step in the Google’s effort to voluntarily become carbon neutral. (Photo: Google)

In explaining the complex deal, Google says, “Buying renewable energy directly from the developer impacts the development of renewable energy projects in ways that are more meaningful than the purchase of Renewable Energy Certificates (RECs) from third parties. RECs allow energy consumers to identify and track power made from eligible sources of renewable energy. They have value and are typically bought and sold independently of the electricity from which they are generated.”

Specifically to this deal, Google is purchasing renewable energy directly from the wind farm. Since they cannot use this energy directly, they will resell “it back to the grid in the regional spot market – but retiring the RECs associated with the power,” according to Mountain View, California-based company. “By obtaining RECs through the purchase of green power, our deal has a greater impact on the renewable industry than simply buying ‘naked’ RECs from third parties; our long-term commitment directly frees up capital for the developer to build more wind projects.” This deal will allow Google to obtain enough power to supply several data centers.

It will be interesting to see how successful Google will be in achieving their goal of becoming carbon neutral. This could be a model for other tech companies that use large amounts of power to run their data centers. Is this a sustainable model for Google? What methods are other companies using to reduce their carbon footprint?
Posted by Aaron Rose at 1:53 AM