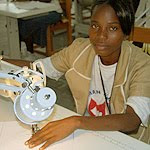 PRI’s “The World” produced a report about a fair-trade clothing factory is the West African country of Liberia, which is recovering from a 14 year civil war. With an estimated unemployment rate to be as high as 80 percent, there is a great for job growth should Liberia maintain peace in the long-term. The World’s Jason Margolis visited a sewing factory in Liberia’s capital of Monrovia that is making t-shirts bound for the United States. With a high unemployment rate, it is easy to take advantage of people by employing them in sweatshops with working hours beyond reasonable limits and paying low wages. (Photo: PRI)

Chid Liberty, who owns the t-shirt factory, was born in Liberia, but his family fled to the United States after a military coup in 1980. With Liberia’s civil war over, Mr. Liberty “decided he wanted to return to his native country and help it rebuild,” explains Mr. Margolis. “Two years ago, Mr. Liberty decided it was finally safe to return. And when he started his apparel company, he was determined to make it good for the workers. He says he’ll take no profits from the Monrovia sewing project. He earns his living through a trading business back in the States. Liberty says all future earnings in Monrovia will be put into a fund.” Mr. Liberty says that “these women actually decide where that money goes in terms of building schools, roads, health clinics in their communities.”

There is value in placing a fair trade label on these t-shirts, which makes good business sense. Most of the women being trained at the factory used to be tailors. “But like Eliza Jones, they left the freedom of their shops for the shackles of 9 to 5 employment,” Mr. Margolis reports. “Now she gets paid every month, $100. That’s $30 dollars more than an average civil servant makes in Liberia. The women also get medical insurance and a monthly bag of rice.”

In order for Mr. Liberty’s factory to have the “fair trade” designation, it must comply with 90 standards prescribed by TransFair USA, a 501(c)(3) nonprofit organization based in Oakland, California. TransFair USA’s standards address child labor, forced labor, health and safety, working hours, and wages. According to its website, TransFair USA is one of twenty members of Fairtrade Labelling Organizations International (FLO), and the only third-party certifier of Fair Trade products in the United States. They audit transactions between US companies offering Fair Trade Certified™ products and the international suppliers from whom they source, in order to guarantee that the farmers and farm workers behind Fair Trade Certified goods were paid a fair, above-market price. In addition, annual inspections conducted by FLO ensure that strict socioeconomic development criteria are being met using increased Fair Trade revenues. Regarding Mr. Liberty’s factory, a full West African supply chain is utilized where the cotton is grown in Mali and Burkina Faso, it is shipped to Morocco where it is spun into yarn and fabric, and then sewn in Liberia.