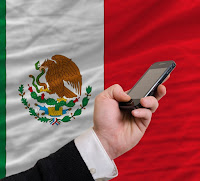 During her presentation, Ms. Ruiz de Velasco noted that revenue from Mexico's mobile segment represents 57 percent of the telecom sector and is growing at faster rates than the industry as a whole. The mobile industry is expected to generate revenues of 262 billion pesos in 2016, up from 246 billion pesos in 2013.

In addition, Mexico had just 2.7 million mobile broadband subscriptions in 2010. Smartphone penetration over total mobile lines has doubled in the last three years and the growth has been driven by the increasing variety of devices offered in the market and price decreases due to brand competition and technological development.

With respect to tablets, Ms. Ruiz de Velasco said that "although the tablet market in Mexico remains small, forecasts show higher consumption of mobile services." The growing adoption of tablets will also accelerate the use of mobile broadband. Mexico's tablet penetration rate for the third quarter in 2015 is estimated to reach 14 percent, which is well-above penetration rates in Brazil and Argentina at 11 and 10 percent, respectively.

Regarding app adoption by Mexican consumers, Ms. Ruiz de Velasco explained the Mexican population shows digital skills for the use of all mobile services and application adoption is highly correlated with expansion of mobile device penetration (i.e., smartphones and tablets). The growth rate for mobile app adoption in Mexico is estimated to be 52 percent while the growth rate is estimated at 65 percent in 2015.

During the Q&A session following the presentation, I asked about the use of mobile applications by Mexican enterprises. While very few enterprises in Mexico are using mobile apps, Ms. Ruiz de Velasco predicted this trend will reverse course as the mobile economy continues to grow and Mexican enterprises seek to gain a competitive advantage at home and abroad.

I agree with Ms. Ruiz de Velasco compelling argument that app developers should consider developing mobile applications specifically designed for the Mexican market. While other emerging markets such as China and India are significantly larger markets with respect to population and number of smartphone and tablet users, Mexico's gross domestic product is higher on a per capital basis. In addition, Mexico has a young population that is seeking to learn valuable skills necessary to succeed in a vastly global economy.

Aaron Rose is a board member, corporate advisor, and co-founder of great companies. He also serves as the editor of GT Perspectives, an online forum focused on turning perspective into opportunity.
Posted by Aaron Rose at 7:13 PM