Observations from the Eureka Park Marketplace at CES 2016

I attended CES® from Jan. 5-9, 2016 in Las Vegas, Nev. During my visit to the internationally renowned electronics and technology trade show, I had the opportunity to visit with several startup companies exhibiting in the Eureka Park Marketplace at CES®. Eureka Park is promoted as "the flagship startup destination at CES, providing a unique opportunity to launch a new product, service or idea."

500 companies exhibited at this year's Eureka Park Marketplace, up from 375 in 2015. According to an announcement by the Consumer Technology Association (CTA)™, which owns and produces CES®, over 1,100 startup companies "have exhibited in Eureka Park since its inception in 2012" and "at least 100 of these startups have been funded at $1 million or more. Eureka Park created a leaderboard that provides a ranked list of those companies who received funding.

This year's Eureka Park had a strong representation from outside the United States. Among the 500 startup companies from 29 countries, "more than 50 percent of exhibitors coming from outside the U.S. New countries represented in Eureka Park in 2016 include Austria, Czech Republic, Greece, Netherlands, New Zealand, Russia, Taiwan, Turkey, and UAE. At the show, Eureka Park is segmented by specific verticals such as wearables, smart home, health and sports tech, 3D printing, audio and video and virtual reality."

Among the hundreds of exhibiting companies, I found particular interest in a company called ECHY, which has developed an environmentally-friendly alternative to electric lighting during the daytime by capturing natural light on the outside of buildings and brought inside by fiber optic cables. According to the company's website, "The idea of using fiber optics to transport sunlight to the inside of buildings began in the 1980s. It was, however, at the time, too expensive to be produced on a large scale." The company's founder's solution, in 2010, has enabled the democratization of natural lighting by fiber optics. They launched their idea while studying at the National Polytechnic School in Paris and patented their technology in 2012.


The Champs-sur-Marne, France-based company further explains that "During the first year, the ECHY team were working on Research and Development at their school in Paris, where they created their first prototype and product: Eschysse. ESCHYSSE has been available on the market since 2013, and marks the commercial beginning of ECHY." The company's team currently consists of six individuals together engineers, researchers and sales representatives. 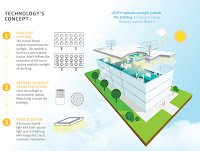 The  company provides the following reasons on why to use its technology:
ECHY produced a brief video that explains how its panels are fixed on a tracking system, which enables them to absorb sunlight during the day and then transport it, via fiber optics, to the inside of buildings.


I also enjoyed visiting with Well Being Digital (WBD101), which created "the smallest heart measurement earbud design." According to its website, the Hong Kong-based company "aims to enable affordable & accurate underlying technologies for mHealth/wearable devices." Among the three platforms or devices, ActivHearts™, MoGo™, and EarTaps™, the Hong Kong-based company demonstrated, I found interest in ActivHearts™, which is a heart rate measurement technology using photoplethysmography (PPG) that can be applied to earphones and wrist watches.

WBD101's website further explains that "one of the challenges of PPG technology is that the PPG sensors pick up a lot of noise when the user is exercising, as it is very sensitive to motion. WBD101 technology uses multiple source and sensor pairs and advance digital signal processing to remove these motion noise." Moreover, "The latest generation of ActivHearts™ makes use of Bluetooth Smart technology (BLE) that means you can easily have your heart rate information displayed on your smartphone apps."


WBD101 produced a video for CES 2016 highlighting its ActivHearts™ technology.


Aaron Rose serves as President and CEO of ROI3, Inc., a Seattle, Wash.-based company that empowers people in emerging economies through innovative, technology-based solutions. He is also the editor of Solutions for a Sustainable World.
Posted by Aaron Rose at 3:29 PM