On the topic of 5G, The Economist published an article that claims the "new wave of mobile technology is on its way, and will bring drastic change." The article notes that "although the previous batch, collectively called 'fourth generation,' or 4G, is still being rolled out in many countries, the telecoms industry has already started working on the next, 5G."

"The advent of 5G is likely to bring another splurge of investment, just as orders for 4G equipment are peaking," the Feb. 20, 2016 article says. "The goal is to be able to offer users no less than the 'perception of infinite capacity,' says Rahim Tafazolli, director of the 5G Innovation Centre at the University of Surrey. Rare will be the device that is not wirelessly connected, from self-driving cars and drones to the sensors, industrial machines and household appliances that together constitute the 'internet of things' (IoT)."

The article correctly explains that the "path to a 5G wireless paradise will not be smooth. It is not only the usual telecoms suspects who will want a say in this mother of all networks. Media companies will want priority to be given to generous bandwidth, so they can stream films with ever higher resolution."
What is more, "Most IoT firms will not need much bandwidth, but will want their sensors to run on one set of batteries for years—so they will want the 5G standard to put a premium on low power consumption. Online-gaming firms will worry about latency: players will complain if it is too high." 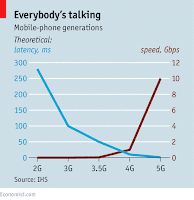 It is important to point out that a lot of hype exists in this next generation of mobile technology. The article says that "when it comes to 5G, much is still up in the air: not only which band of radio spectrum and which wireless technologies will be used, but what standards makers of network gear and handsets will have to comply with." Furthermore, "Telecoms firms have reached consensus only on a set of rough 'requirements.' The most important are connection speeds of up to 10 gigabits per second and response times ('latency') of below 1 millisecond (see chart)."

Despite the hype corporate executives and political leaders worldwide are making, often prematurely or ignorantly, the article accurately notes "the momentum is real. South Korea and Japan are front-runners in wired broadband, and Olympic games are an opportunity to show the world that they intend also to stay ahead in wireless, even if that may mean having to upgrade their 5G networks to comply with a global standard once it is agreed."

China and India, the world's largest and fastest growing mobile markets, respectively, will provide significant opportunities in the deployment and subsequent commercialization of 5G. With respect to the U.S. market, "AT&T and Verizon both invested early in 4G, and would like to lead again with 5G."

The article concludes with a discussion about the evolution versus revolution development of 5G. While you can read the entire discussion in the article, as a member ITU's focus group to identify the network standardization requirements for the 5G development of International Mobile Telecommunications (IMT) for 2020 and beyond, I have listened to much discussion about the evolution versus revolution development of 5G. Regardless of the rhetoric among the technical engineers devoted to the development of 5G, many sectors will benefit from this new wave of mobile technology including cloud computing, IoT, virtual reality, and 3D content accessible through a mobile device such as a smartphone, tablet, or smart watch.

What are your thoughts about The Economist's article?

Aaron Rose is a board member, corporate advisor, and co-founder of great companies. He also serves as the editor of GT Perspectives, an online forum focused on turning perspective into opportunity.
Posted by Aaron Rose at 10:28 PM