Remedies for Business Disputes in China 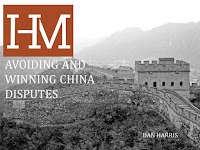 Based on my experiences of doing business in China, I agree with The American Chamber of Commerce in Shanghai's (AmCham Shanghai) assertion that "China offers many opportunities for American companies looking to grow their business. However, in order to succeed in China's market, businesses must thoroughly investigate their specific market, take heed of product standards, and pre-qualify potential business partners." The independent, non-partisan, not for profit, business organization produced a webinar series focused "on planning your market entry strategy to minimize the likelihood of ending up in a business dispute with your Chinese partner." Dan Harris, a founding member of Harris Bricken, an international law firm with lawyers in Seattle, Portland, San Francisco, Barcelona, and Beijing, presented the fourth and final webinar in the series on the topic of "Remedies for Business Disputes in China." This post highlights a few points made by Mr. Harris in his presentation, "Avoiding and Winning China Disputes."

Mr. Harris, who also serves as co-editor of the China Law Blog, started his presentation by explaining the importance of choosing a good partner, which is defined as whomever you are choosing to do business with in China, and having a good contract are two keys to avoiding and winning China disputes. With respect to the former, Mr. Harris explained the importance for foreign companies to perform due diligence on the Chinese company to verify its validity. "Legitimate Chinese companies are less likely to engage in fraudulent behavior than a company that does not exist," Mr. Harris said. He warned, however, certain investigative techniques performed in the normal due diligence process in Europe or the United States may be illegal in China. Furthermore, documents produced by the Chinese company may be faked. "If you find something that seems faked, that may be a good thing since you now know what kind of company you're dealing with." 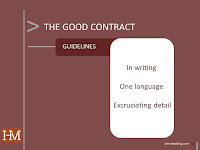 Guidelines of having a good contract with a Chinese company include having the contract in writing, one official language that is clearly delineated (ideally in Chinese if there is a chance the contract will be disputed in a Chinese court), and excruciating detail. In addition, a good contract should consider dispute resolution such as the location or jurisdiction of where the contract dispute will get resolved. Finally, a good contract should have a liquid damage clause (also known as "contract damages" in the Chinese legal system), which is defined as monetary compensation for a loss, detriment, or injury to a person or a person's rights or property, awarded by a court judgment or by a contract stipulation regarding a breach of contract.

Clarity, prevention, and enforcement are three reasons for having a good contract, according to Mr. Harris. "Drafting a good contract in Chinese will provide tremendous clarity" with respect to the expectations for all parties named in the contract. Regarding the latter two reasons, having a good contract will present an indication to the other party of your intent to sue to have the contract enforced if there is a violation of any term clearly set forth in the contract. And with respect to judicial corruption and the enforcement of contract, Mr. Harris noted that not all Chinese judges are corrupt despite the reputation otherwise. 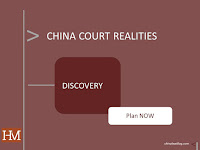 The final point that I wish to cover is China does not have a discovery process similar to what is found in the American legal system. In the Chinese court system, one party cannot ask questions of the opposing party nor can you compel the other side to produce any documents. Mr. Harris recommended that "as you are drafting your document, you will need to be planning for which documents you will need" so that you can be victorious if you decide to litigate in a Chinese court. "On the plus side, cases can move very quickly."

While I will not address them here, I should note that Dan Harris' presentation covered arbitration options outside of China (e.g., Hong Kong, Singapore, Vancouver, and New York) as well as options within China through the China International Economic and Trade Arbitration Commission (CIETAC).

I found this presentation informative and I encourage any company looking to conduct commercial transactions in China to watch the webinar in its entirety. In future posts, I will discuss additional webinars produced by AmCham Shanghai, through its SME Center, in collaboration with the U.S. Commercial Service.

What tactics have you used to remedy business disputes in China?

Aaron Rose is a board member, corporate advisor, and co-founder of great companies. He also serves as the editor of Solutions for a Sustainable World.
Posted by Aaron Rose at 1:00 AM