Japan's Importance in the Future of Asia

While it has been 12 years since I conducted any business transactions in Japan, I hold fond memories of my trips to the East Asia island country and warm interactions with the Japanese people. In addition, as a resident of the state of Washington, I have come to appreciate the close relationship the Pacific Northwest has with Japan. Therefore, I was quite interested in attending the "Update on Japan and Role in Asia: Japan's importance in the future of Asia" conference on Mar. 31st, 2016 in Seattle, Wash. Sponsored by the Japan-America Society of the State of Washington (JASSW), this conference brought together Japan's foremost researchers and top political minds in the areas of economics, geopolitics, and international relations to discuss the current state of the country and projections for Japan's role in Asia's future. This post highlights two of the presentations made during the half-day event, which was comprised of three excellent speakers and a panel of four highly accomplished individuals.

Daisuke Karakama, Chief Market Economist for Foreign Exchange at Mizuho Bank, served as the first speaker with his presentation, "Abenomics and the Japanese Economy." He noted that "Japan has been suffering from low growth for two decades." The country's annual average real gross domestic product (GDP) rate has fallen from 4.7 percent in the 1980s to 0.8 percent in the 2000s. Furthermore, nominal GDP in 2012 at 475.1 trillion yen was the same in 1991. And while Japan's Consumer Price Index has increased 0.3 percent annually since 1990, the Urban Land Price Index has declined by 4.4% during the same period resulting in a drop of 65 percent over the past 25 years.

Mr. Karakama then provided an overview of economic policies advocated by Japan's Prime Minister Shinzō Abe, which are commonly known as "Abenomics." The three arrows of Abenomics include fiscal stimulus, monetary easing, and structural reforms. Mr. Karakama provided some indication that Abenomics is working such as Japan's unemployment rate fell to its lowest level since 1997 at 3.3 percent, the ratio (1.17) of job offers to applicants hit an 18-year high in 2015, and the Nikkei 225 Average reached its highest level since 1994.

Certain economic indicators are getting worse during the past two years of Abenomics, according to Mr. Karakama. For example, the rate of increase real wages (year-over-year) has gone from -1.0% to -2.2%, the ratio of non-regular staff increased from 35.6% to 37.9%, and the percentage of households with no savings increased from 26.0% to 30.4%.

Japan's economic recovery is stalling, Mr. Karakama explained. One cause for the stalled recovery is weak demand for Japanese goods by China as the Middle Kingdom's economy is experiencing a deceleration. While not as high as Malaysia's 8.4 percent or South Korea's 5.4 percent, value-added exports to China represents 2.2 percent of Japan's GDP.

However, Mr. Karakama seemed cautiously optimistic about the future of Japan's economy citing a continuing trend of declining unemployment rate and a gradual increase of active job opening-to-applicants ratio. Moreover, real wage income for Japanese workers will continue to increase at a solid pace due to the rise of employment of women and seniors. He also said the following three factors the Japanese economy will achieve a growth rate of one percent in FY2015: Support from monetary policy by a continuation of monetary easing due to the moderation of inflation, support from fiscal policy through the postponement of a further consumption tax hike coupled with implementation of emergency economic stimulus measures, and support from the low price for crude oil.

Noting that Tokyo, both the capital and largest city of Japan, will host the Games of the XXXII Olympiad (2020 Summer Olympics), Mr. Karakama said Olympic-related investments will push the GDP up even further through capital investments of JPY10 trillion by four Olympic-related sectors (services, real estate, transportation & communications, wholesale & retail). As a result of hosting the Summer Olympics, Japan's growth rate will improve to mid 1% by 2020. 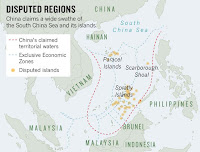 Dr. Kawano presented three basis features of the dispute in the South China Sea, which contains a crucial shipping lane and high potential of marine resources, among China, Indonesia, Japan, Malaysia, the Philippines, and Vietnam. China's claim on the basis of the so-called nine-dash line for maritime features and maritime areas (see left map), a co-existence of the claims of several coastal states, and an accumulation of unilateral acts of coastal states to manifest or enhance their claims and entitlements.

Citing an op-ed that suggests the Association of Southeast Asian Nations (ASEAN), a political and economic organization of ten Southeast Asian countries, remain neutral on the South China Sea dispute, I had the opportunity ask Dr. Kawano if she agreed with this opinion. Or should ASEAN, together with India and Japan, join in a united effort to condemn China? While she refrained from providing a direct opinion, Dr. Kawano noted territorial disputes in Africa involved the support of countries that not have a direct claim in the dispute, but had an economic interest in seeing the dispute settled in favor of the claimants.

While this conference produced excellent information about the important role Japan has played in the geopolitical arena since the end of World War II, it is still unclear what role the country will play in Asia's future. It should be recognized that Japan is the world's fifth largest economy after China, the European Union, the United States, and India. However, for Japan to maintain its importance in Asia, it must address its domestic issues such as an ageing population, improving sexual equality (where the country is bottom of the rich world in most rankings), and increasing industrial production. For now, Japan will continue to play an important role in regional security and stability.

What is your view of the future of Japan's economy? Will the dispute in the South China Sea get resolved amicably?

Aaron Rose is a board member, corporate advisor, and co-founder of great companies. He also serves as the editor of GT Perspectives, an online forum focused on turning perspective into opportunity.
Posted by Aaron Rose at 12:00 AM