On Aug. 9, 2017, The Economist Intelligence Unit (The EIU) held a webinar titled, "Asia: Back on track or on the brink?" Presented by John Marrett, East Asia analyst for The EIU, the webinar began by explaining how the global economy is growing in 2017. The United States is experiencing full employment along with gross domestic product (GDP) growth at 2%. The euro area, the monetary union of 19 of the 28 European Union (EU) member states which have adopted the euro as their common currency and sole legal tender, is experiencing low, but stable growth.

China, the world's second largest economy, is seeing stable economic growth with 6.8% GDP growth. Even emerging markets such as Brazil and Russia have seen their recessions end this year. Mr. Marrett also said that global inflation is projected to reach 4.4% in 2017, the highest rate in six years, which "is an indicator of a strengthen economic picture." 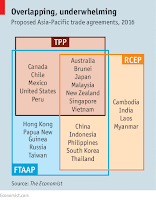 On the topic of Asian regional integration, Mr. Marrett said the loss of a U.S.-led Trans-Pacific Partnership (TPP) along with an increased uncertainty between Asia and the West, intraregional integration is still professing. Multilateral free trade agreements (FTAs) such as the Free Trade Area of the Asia Pacific (FTAAP) and Regional Comprehensive Economic Partnership (RCEP) are expected to strengthen Asian intraregional trade. The implementation of FTAAP or RCEP, however, may not come for years ahead.

Mr. Marrett further said import duties on goods traded between Indonesia, Malaysia, Philippines, Singapore, Thailand and Vietnam (ASEAN-6) have been eliminated. And by 2018, Cambodia, Laos, Myanmar, and Vietnam are scheduled to eliminate all remaining import tariffs. Moreover, a large number of international infrastructure projects are underway throughout Asia, many of which are the result of China's Belt and Road Initiative.

"China is the backbone of [Asia's] regional growth" as the Middle Kingdom produces 44% of Asia's nominal GDP with the rest of Asia and Australasia contributing 56%. This is a concern given China's expected economic deceleration to an average of 4.8-4.9% GDP growth from 2018-2019.

Chinese growth is still investment-led, which is a concern as credit is fueling high levels of investment. China's private non-financial sector credit as a percentage of GDP is at an alarming level of 200%. "This is storing problems for later," Mr. Marrett notes. The Chinese government, which is aware of these issues, has taken some steps to mitigate the credit problem. Xi Jinping, China's president will take strong steps after the 19th CCP National Congress in the autumn of this year in Beijing where he is expected to consolidate his power.

China's economic slowdown impact intraregional trade on a varying range of sectors and countries. The greatest impact will be felt in places such as Mongolia and Taiwan. The former is disproportionately dependent on demand from China for majority of its exports. The latter has a broad trade relationship with China, but Taiwanese capital goods will be hardest hit. "Australia will take a hit as well" as China reduces it demand for commodities produced by Australia's mining sector.

Japan and India will be less impacted by China's economic deceleration. The Japanese economy is more diverse in terms of export destinations than many other East Asian countries; whereas India's is more dependent on Middle Eastern and European markets.

Mr. Marrett concluded his presentation by explaining: "China's hard landing will not define the regional economic story in 2018" for the Asian region. He presented the slide that showed Asia GDP growth rates for 2017 and 2018 for several countries and special administrative regions: 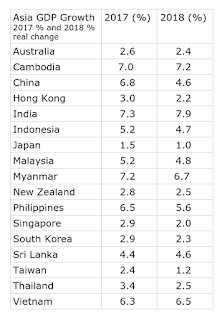 Mr. Marrett importantly noted that "the economic distress cause by China's slowdown will not be enough to be politically destabilizing to China or other Asian countries."


While China may experience an economic slowdown in the next few years, I remain optimistic of the opportunities that exist in middle and higher income countries in ASEAN where private consumption is growing at a rapid pace. The implementation of bilateral and multilateral FTAs will further facilitate intraregional trade, which will be a boon for small businesses and multinational corporations alike.

How are you positioning your business to capitalize on the opportunities presented in Asia's growing economies?

Aaron Rose is an advisor to talented entrepreneurs and co-founder of great companies. He also serves as the editor of Solutions for a Sustainable World.
Posted by Aaron Rose at 6:26 PM