Global Economic Growth in 2017 is as Good as it Gets

On July 27, 2017, The Economist Intelligence Unit (The EIU) held a webinar, "The world economy in the age of Trump," which focused on the global outlook for 2017-18. Presented under the title of "Good Economics, Bad Politics: The Global Outlook for 2017-18" by The EIU's John Ferguson, Director of Global Forecasting, and Mike Jakeman, Global Economist, the webinar focuses on the United States outlook along with the main regional forecasts that present the most significant risks to the global economy.

Mr. Jakeman begins by noting global growth will accelerate in 2017 and the world's economy is looking at its healthiest in years. In other words, the global economy is seeing its best performance since before the 2007-08 financial crisis. For example, the U.S. is experiencing close to full employment as gross domestic product (GDP) is expected to rise to 2% in 2017.

In addition, the eurozone, the monetary union of 19 of the 28 European Union (EU) member states which have adopted the euro as their common currency and sole legal tender, is growing steadily.

Many emerging markets will be stronger in 2017, Mr. Jakeman said. With 6.8% economic growth in China, 2017 is proving to be a good year for the world's second largest economy. Brazil and Russia are also seeing economic growth this year with both countries no longer experiencing an economic recession.

However, risks, notably political, exist that may stymie the resent global economic upswing. Mr. Jakeman notes that U.S. President Donald Trump's impulsive behavior to weaken domestic institutions, which is threatening American democracy, and his disrespect for old alliances and prioritizing commerce over diplomacy could create headwinds for the global economy.

In addition, the webinar claims "thuggish authoritative leaders" such as Russia's Vladimir Putin (overt anti-Westernism, tight controls ahead of Russia's 2018 elections, and meddling of US election), Turkey's Recep Tayyip Erdoğan (shift to executive presidency that will keep him in power until 2029), and the Philippines' Rodrigo Duterte (7,000 dead in war on drugs, dissenting voices marginalized, and a state of emergency), are invoking policy or implementing actions that may derail positive global economic growth.

Turning his attention specifically to the U.S., Mr. Jakeman said there are certain priorities set before Congress. Tax cuts will take time, but deregulation is happening now. Healthcare has been a mess for decades and will probably remain so, according to the webinar. As for tax reform, personal and tax cuts are coming rather than comprehensive reform of the United State Internal Revenue Code. 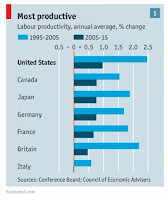 Mr. Jakeman then explained that "Trumpism will not transform the economy. Fiscal surge could help temporarily, but growth of 4% will be out of reach." He also noted how productivity growth has halved in the U.S. from 2005-2015 compared to the period of 1995-2005. Moreover, a slower labor force growth will prevent the Trump administration of reaching its 2016 campaign promise of achieving 4% GDP growth. Mr. Jakeman notes tax cuts for the rich leads to saving, not spending (wealthy have lowest marginal propensity to spend) and any rapid growth of the U.S. economy will be inflationary, which the Federal Reserve would lift rates in response to curtail such rapid growth.

Disappointingly, The EIU webinar projects the U.S. economy will experience a recession in 2019. "Only two quarters of contraction, but enough to bring growth down to 1%."

Focusing on Europe, Mr. Ferguson said economic recovery is taking hold in the eurozone. "Tentative signs of recovery are building. Unemployment is falling, euro is rising, and growth revised up to 1.9% in 2017." However, Europe is "never far from a crisis." Brexit negotiations, Grexit, Italian debt, and the election of populist candidates may adversely impact Europe's economic growth in the next few years.

Regarding the Middle Kingdom, China's politics will supersede economic reform in 2017 as a result of the 19th National Congress of the Communist Party of China to be held later this year in Beijing. According to Mr. Ferguson, China's rise of GDP of recent time has been fueled by debt. For example, China's private non-financial sector credit as a percentage of GDP is at an alarming level of 200%, which is proof that the country's debt dynamics are unsustainable. As a result of "a policy-induced managed slowdown" by the Chinese government, The EIU projects a continuing deceleration of China's economy with GDP falling from 6.8% this year to 4.6% in 2018.

"In summary, 2017 is as good as it gets," Mr. Ferguson said. "First China and then the U.S. will exert downward pressure on the global economy." Emerging countries like India, Iran and Russia (despite sanctions imposed on Russia by Australia, Canada, EU, Japan, and the U.S.) will continue to see economic growth, while Qatar will experience economic decline given the political crisis the country is facing from its Middle East neighbors.

Do you agree with the information presented in this webinar? How will your business be affected if the U.S. experiences an economic recession in 2019 or China sees a deceleration of economic growth in the next couple of years?

Similar to investing in public equities of buying on the low, businesses should consider expanding to new markets that are experiencing an economic recession or deceleration. Doing so will provide an ample opportunity for taking advantage of the rewards that will materialize when the economy returns to growth.

Aaron Rose is an advisor to talented entrepreneurs and co-founder of great companies. He also serves as the editor of Solutions for a Sustainable World.
Posted by Aaron Rose at 1:16 AM