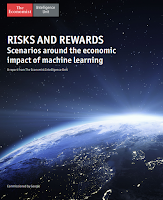 "There is more uncertainty around advances in artificial intelligence (AI) and one of its major sub-sets, machine learning, than the current debate suggests, particularly with regard to the technology's impact on society and the economy," explains The Economist Intelligence Unit (EIU) in a report entitled Risks and rewards: Scenarios around the economic impact of machine learning. "No doubt the advances have indeed been incredible and advocates are right to highlight them. A decade ago few believed that a car could drive on its own, even in a controlled environment, or that an algorithm could learn how to label and organize photographs. Yet both of those are now possible and various forms of AI are performing new tasks it seems on a weekly basis."

Commissioned by Google, The EIU report is based on the results of econometric modeling of three scenarios covering five countries—the US, UK, Japan, South Korea and Australia—and Developing Asia as a region. In addition, the report presents qualitative scenarios for four industries: manufacturing, healthcare, energy, and transportation.

Impact on GDP and productivity

With respect to the three econometric scenarios, The EIU uses its current forecast to 2030 as a baseline. The scenarios are:

Scenario #1: Greater human productivity through upskilling
"Scenario #1 assumes a higher degree of complementarity between human skills and AI than does the baseline and that governments will invest more in upskilling than current trends suggest. In the results, every country or grouping covered benefits, but some more than others. Australia, where growth in services is becoming more important for incremental economic growth than commodity exports, would see the greatest gains. The gains elsewhere would be more modest by comparison; although in this scenario, the UK's productivity rises to slightly positive from our baseline forecast, which is for a slight decline."

Scenario #2: Greater investment in technology and access to open source data
"Scenario #2 assumes investment in access to open source data, tax credits to spur private sector adoption of machine learning, and advances in computing efficiency drive hardware costs down. This scenario yields the most encouraging results insofar as economic growth is concerned. Each of the five countries, as well as Developing Asia as a group, experience higher levels of growth relative to our baseline forecast. Australia, again, along with Developing Asia, reap the greatest rewards from promoting investment in this scenario, but all of the countries covered see GDP rise by at least 1% above the baseline between now and 2030."

Scenario #3: Insufficient policy support for structural changes in the economy
"Scenario #3, which is the one negative scenario among the three, assumes the substitution effect for labor dominates due to inaction in workforce development—or more simply, skills— and a lack of national data sharing schemes. The losses are substantial compared to the baseline. The UK and Australian economies actually shrink in US dollar terms versus today, as a result, with the UK's economy becoming US$420bn smaller in absolute terms and the Australian economy US$50bn. The US, Japan and Developing Asia still grow in this scenario, but their economies are all significantly below the baseline, with the US and Developing Asia both off by around US$3trn."

The qualitative scenarios look at four industries: manufacturing, healthcare, energy and transportation, which are provided below in its entirety from the report's Executive Summary.

Manufacturing
Employment in manufacturing has become a headline issue with the rise of populism in certain developed countries. When discussing AI, it's important to differentiate automation in hardware, such as robotics, from automation in software, AI and its sub-sets. The former has already had a significant effect on labor demand in the sector and while the latter may contribute to this trend, its impact has been less direct, at least to date.

When manufacturing firms talk about AI, they talk about creating greater efficiencies in their supply chains, reducing maintenance costs and moving towards batch production. Each of these may or may not result in the elimination of low wage jobs, but they will almost certainly create high wage ones, albeit not at a one-for-one ratio. The speed at which firms turn towards automation in both hardware and software depends on the 'payback period,' a measure which weighs the cost of investment in automation versus that of the cost of local labor."

Healthcare
As a knowledge industry, healthcare is ripe for AI and there are a variety of applications already in place. It's being used in the discovery process for new drugs, to save costs in both prevention and treatment, and to augment the abilities of practicing physicians and clinicians.

Yet there are constraints. The healthcare sector has traditionally been slower than most sectors to adopt innovations. That may be changing, however slowly, but there are other hurdles that need to be overcome. One is the issue of privacy. Patients are understandably sensitive about their personal data being shared and unless they can be assured their data will only be used for specific and agreed purposes, they may not agree to sharing it at all. That would hinder the use of AI considerably, dependent as it is on data for developing solutions.

Energy
AI is expected to have the most significant impact on the energy sector in transforming generation, transmission and distribution into a more coherent system. This means, among other things, creating pricing systems based on probabilistic models and developing smart grids that can better deal with the issue of intermittency, or the fact that the wind doesn't always blow and the sun doesn't always shine. Solving for intermittency will allow electricity providers to maximize their use of green energy.

This does not come without risks. Smart grids, while more efficient than current analogue grids, are exposed to new and greater risks from cyber-attacks, which, in turn, creates national security concerns. That has knock-on effects on the willingness of local governments to integrate their grids and share their data.

Transportation
While autonomous vehicles have captured much of the public's attention, even though they may still be far off, AI is already making major contributions to the speed and safety of public transport. In many cities, AI being used to balance the flow of passengers across different modes of transport and data received from sensors around cities, combined with AI, are helping to make traffic flow more smoothly.

The advent of autonomous vehicles nevertheless remains in the fore of people's minds in this area. Besides the obvious issue of its impact on employment, there are regulatory and privacy concerns, as well as the question of liability when, inevitability, a driverless vehicle becomes involved in an accident, fatal or otherwise.

The report also identifies five approaches to grounding the discussion in reality.

Managing expectations. "In the near-term, AI will be neither utopian nor dystopian. It will provide new benefits and it will create new problems. Exaggerating its upsides is as detrimental to the debate as is exaggerating its downsides."

Better communication. "There are many understanding gaps when it comes to AI, but one of the most important to bridge is that between developers and businesses and government institutions. The former are often only dimly aware of what the latter two really need, and the latter, in turn, are often only dimly aware of the potential solutions the former could provide. A more robust and frequent exchange of information, capabilities and needs would help to remedy this."

Acknowledging the risks. "It is important to acknowledge that AI presents risks to employment, as well as privacy, and to start finding solutions to these and other issues rather than encourage complacency or resignation through unshakeable confidence."

Improving trust and transparency. "'Trust us' or trust the algorithm is not a viable strategy for gaining widespread acceptance of AI and its various subfields. Developers and users alike need to make known what they are doing and how they are doing it, in a way that is both meaningful given the usage context and practical given technological constraints."

Educating the public. "Gaps in knowledge and understanding are filled more quickly than ever with misinformation and distortion. The public needs an explanation of what AI is and does, and as simply as possible."

Lastly, the report importantly notes: "Policymakers, for their part, face a number of choices as regards AI and its impact." These choices include investing in skills and training, dealing with data, and investing in R&D and technology.

How do you see artificial intelligence's impact on society and the economy?

Aaron Rose is an advisor to talented entrepreneurs and co-founder of great companies. He also serves as the editor of Solutions for a Sustainable World.
Posted by Aaron Rose at 12:00 AM