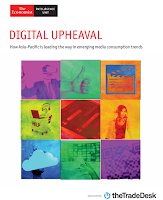 A report published by The Economist Intelligence Unit (EIU) asserts that "although smartphones are now ubiquitous across much of the planet, Asia is at the cutting edge of innovation when it comes to their use." Digital upheaval: how Asia-Pacific is leading the way in emerging media consumption trends further says: "Already, across much of the region there has been fundamental change in media consumption and communication. Thanks to smartphones, which have brought millions online for the first time, many countries have leapfrogged the traditional intermediate stages of media consumption, and individuals have taken control. They can now access what they want, where and when they want it." Commissioned by The Trade Desk, a Ventura, Calf.-based technology company that empowers buyers of advertising, the report is based on in-depth research, including interviews with 16 experts and executives.

Based on my frequent travels to Asia over the past several years, I concur with the report's assertion that "the region's entrepreneurs have been quick to seize the opportunity, creating new networks of information and entertainment, and finding innovative uses for technologies such as multi-functioning messaging apps and quick-response (QR) codes."

Moreover, the report, which is available in English, 简体中文, and 日本語, explains, "All of this has opened up new channels of communication between businesses and consumers. It has also been a boon to the region's creative industries, notably small-time content producers such as individual live streamers. Further media-related innovations popularized in Asia, like the ability to link micropayments to these live-streaming platforms, are proving this region's inventive prowess to the rest of the world."

Regarding the Middle Kingdom, the report accurately notes:

China's unique digital ecosystem is a vital part of the story, giving rise to platforms like WeChat that have pushed the boundaries of technologies in areas such as payment and financial services, and paved the way for artificial intelligence (AI)-enabled chatbots to do things such as aiding customer interaction. Chatbots are just one new avenue companies are using to talk directly to individual consumers—QR codes are another, while digitally informed segmentation of markets for advertising campaigns can help brands forge new connections between data, clicks and purchases in the region.

Alongside the exciting advances, however, "there are concerns: Asia's frantic surge in smartphone-enabled media consumption has led to worries about media literacy. For example, Carol Soon of the National University of Singapore warns that Asian consumers have less awareness of data-privacy concerns than in Europe or North America, where it is a major issue. In the advertising space, tracking online metrics can be difficult for marketers used to channels such as TV.

"The story of Asia's digital media consumption, however, is predominantly about burgeoning opportunities and clever leaps, echoing the region's recent dramatic economic growth. Although most of these innovations can be found outside the region, in Asia their development, use, scale and impact are distinctive in several ways."

The following key advances in media consumption in Asia are addressed in the report:

Hyper-functional messaging platforms (China)
Platforms such as WeChat have become mutifunctional, especially with financial services. This is both threatening the ecosystem of app proliferation and upending payment models.

Live-streaming services (China)
Mass live streaming, an entirely new digital media category, has become especially popular among internal rural migrants, who number nearly 300 million and use it to forge informal networks of support in new environments. This has sparked new innovations in micro-payments between audiences and content creators.

QR codes (China)
Companies are finding innovative uses for QR codes, which allow them to communicate directly with individual customers in on-the-go situations.

Natural-voice interfaces (Asia-Wide)
The region is at the fore of developing voice-enabled interfaces between users and software (including chatbots).

What innovative ways have you observed in the use of smartphones in Asia?

Aaron Rose is an advisor to talented entrepreneurs and co-founder of great companies. He also serves as the editor of Solutions for a Sustainable World.
Posted by Aaron Rose at 2:01 AM