EIU Report Explores How Brexit Will Affect Trade, Regulations and Jobs Within Six Sectors of the UK Economy 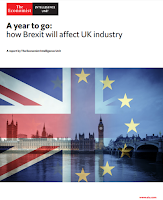 To my surprise (and disappointment), the United Kingdom electorate voted in 2016 to leave the European Union. In March 2017, Theresa May, the UK prime minister, informed the European Council president Donald Tusk of the UK's intention to leave the EU in March 2019 in accordance with article 50 of the Treaty on the European Union. Several of my friends and colleagues have asked for my opinion on how Brexit will affect the UK's economy in general as well as its impact in specific sectors.

Admittedly, I have yet to formulate a definitely response. To date, so many variables are undetermined, which carry terms such as "hard Brexit," "soft Brexit," "EEA" or European Economic Area, "Norway minus," just to name a few. Therefore, I read with great interest a report, A Year To Go: How Brexit Will Affect UK Industry, published by The Economist Intelligence Unit (The EIU) that explores how Brexit will affect trade, regulations and jobs within six sectors of the UK economy.

The report provides the latest update about negotiations between the UK and EU by noting that "a summit of EU leaders on March 23rd agreed the terms of the transition agreement reached by the UK and EU negotiating teams on March 19th. Talks on the substantive issue of the future trading relationship have yet to start in earnest and a deal is supposed to be done by October 2018 to allow time for ratification."

Moreover, "With a year to go before the UK leaves the EU and the 21-month transition period begins—during which time the UK will maintain access to the single market and will be bound by the obligations of membership--this report analyzes the possible impact on six sectors of the UK economy. The transition agreement provides businesses with some certainty that they will have time to adjust to the new UK-EU relationship. However, Brexit will nevertheless entail some disruption. In three sectors, we expect the impact to be direct and difficult to manage—financial services, healthcare and life sciences, and automotive. In consumer goods and retailing, telecoms and energy, the impact is likely to be more diffuse but still disruptive."

The first part of the report discusses The EIU's "current core forecast for Brexit, which involves the UK agreeing to a Canada-style free-trade-agreement (FTA) with some special terms for sectors that are particularly important to the UK economy." The report adds, "this so-called Canada-plus-plus deal will probably emerge during the transition period. We then outline a 'hard Brexit' or 'nodeal Brexit' scenario that involves talks breaking down during the transition period, and the UK leaving the EU without a trade agreement. Using the usual modelling techniques that underpin our industry forecasts, we compare how the economic growth projections for these two scenarios would affect key indicators for our six sectors, unless policies are adopted to mitigate those effects.

"The second section of this report is more qualitative and focuses on how Brexit will affect companies and other organisations operating in our six sectors. The issues at stake mainly involve trade, regulation, employment and skills and access to investment with much riding on how the UK coordinates its policies with those of the EU and its institutions."

The issues at stake mainly involve trade, regulation, employment and skills and access to investment with much riding on how the UK coordinates its policies with those of the EU and its institutions. 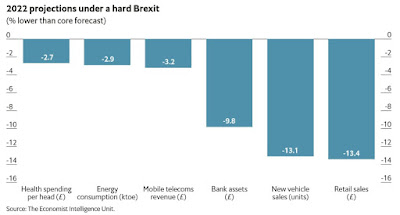 The EIU's key forecasts are:

"We expect the UK economy to carry on growing in 2018-22 under our core scenario of a Canada-plus-plus deal and our hard Brexit scenario. However, if the UK leaves the EU without a trade deal we estimate that by 2022 the UK’s nominal GDP will be 2.7% lower than in our core scenario. Given that inflation would also rise under a no-deal Brexit, real GDP growth in 2020-22 would probably be halved. However, our long-term outlook for the UK economy remains positive, regardless of the terms of the UK’s departure from the EU.

"After Brexit our view is that London will retain its status one of the world's leading financial centers, along with New York and Singapore, and that it will also remain Europe's leading financial hub after Brexit. There is also a large degree of inter-dependence between the UK and EU financial services sectors, just as there is for the trade in goods between the UK and the EU. This inter-dependence matters and means that there is to some degree a mutual interest in achieving a deal that works for both sides. Even under the core scenario, however, a financial services deal will be partial and some financial institutions will consider relocating some personnel and parts of their business after Brexit. The sector is more reliant on global than on EU trends, and will remain a robust driver of the UK economy.

"The healthcare and life sciences sector is likely to see exports shrink under our core scenario, but the worst-case scenario—a shortage of much-needed medicines—will be avoided through regulatory agreements. The slower economic growth predicted under a no-deal Brexit scenario would dent tax revenue and consumer spending. Unless policies are adopted to mitigate the effect, this would result in total health spending per head being £90 (US$125) lower in 2022 than it would be under a softer Brexit. However, the UK government could potentially use some of the fiscal savings from ending contributions to the EU budget to mitigate the impact on these sectors.

"The automotive sector faces a huge challenge: without a UK-EU FTA, large-scale production in the UK would become difficult. UK vehicle-makers will try to expand in other export markets, but will also need to stimulate domestic demand. Under a no-deal Brexit, we forecast that vehicle sales would be 13.1% lower by 2022 than they would be under our core scenario. Cumulatively, the industry would sell around 840,000 fewer vehicles between 2019 and 2022 than under our core scenario.

"The loss of EU workers and disputes over regulation will affect most consumer goods manufacturers, as well as the food sector. Unless agreements are reached over mutual recognition, the effect is likely to push down exports and push up the prices of imports still further. The biggest impact of a no-deal Brexit would be on retail spending, which could be 13.4% lower in nominal terms in 2022 compared with our core scenario.

"In terms of energy policy, the UK will continue to forge ahead on emissions reductions and decarbonization. However, the task will become more difficult and energy costs may rise if it exits Europe's internal energy market. Energy consumption would be 2.9% lower by 2022 if the UK leaves the EU without a deal and the economy slows as expected.

"The UK's exit from the 'digital single market' will primarily affect telecoms operators with significant business on the continent. However, there may also be an effect on investment in innovation, as well as on the prices that UK consumers pay when using their mobile phones abroad. Investment in mobile technology could be 3.5% lower by 2022 under a no-deal scenario."

Based on my readings as well as conversations with experts in financial services, I agree with The EIU's assessment that London will retain its status one of the world's leading financial centers and that it will also remain Europe's leading financial hub after Brexit. I expect, however, to see financial firms grow their operations in key EU cities such as Dublin, Frankfurt, Madrid, and Paris in the coming years. Doing so will mitigate any work permit issues employees from countries outside of the EU may encounter working in the UK. Furthermore, companies, including those I manage or consult, may develop a two-pronged European strategy with a unique approach for tailored for doing business in the UK and a separate strategy for the EU.

As far as Brexit's impact on the other five sectors covered by the report, I remain attentive to negotiations that will lead to formal agreements in the months ahead. I think the UK electorate made a mistake in voting to leave the EU. Nevertheless, I, along with several U.S.-based business executives, am hoping for a solution that will provide minimal negative impact to the UK economy.

How do you think Brexit will affect trade, regulations and jobs within the aforementioned six sectors of the UK economy?

Aaron Rose is an advisor to talented entrepreneurs and co-founder of great companies. He also serves as the editor of Solutions for a Sustainable World.
Posted by Aaron Rose at 2:24 AM