Driven by Developing Countries, the Number of Unique Mobile Subscribers Will Reach 5.9 Billion by 2025 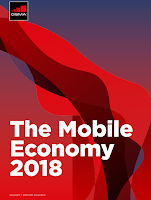 According to a report. The Mobile Economy 2018, published by GSMA Intelligence, "The number of unique mobile subscribers will reach 5.9 billion by 2025, equivalent to 71% of the world’s population." Furthermore, "Growth will be driven by developing countries, particularly India, China, Pakistan, Indonesia and Bangladesh, as well as Sub-Saharan Africa and Latin America."

The report further explains: "The speed of growth is slowing though, with most of the developed world approaching saturation. The more significant growth opportunity will lie in mobile internet – a market that will add 1.75 billion new users over the next eight years, reaching a milestone of 5 billion mobile internet users in 2025."

Importantly, "Mobile internet adoption will increasingly become the key metric by which to measure the reach and value created by the mobile industry, including its contribution to the UN’s Sustainable Development Goals (SDGs). It also contributes to developments in the wider digital ecosystem, as mobile internet users are the addressable market for e-commerce, fintech and a range of digitally delivered services and content."

On the topic of 5G, the report asserts, "A number of mobile 5G commercial launches are expected over the next three years in North America and major markets across Asia and Europe. China, the US and Japan will be the leading countries by 5G connections in 2025, while Europe as a whole will continue to make progress with 5G deployments. In total, these four economies will account for more than 70% of the 1.2 billion 5G connections expected globally by the end of the forecast period."

Moreover, "By 2025, two thirds of mobile connections (excluding cellular IoT) across the world will operate on high-speed networks, with 4G accounting for 53% of total mobile SIMs and 5G at 14%. To support customer migration and further drive consumer engagement in the digital era, mobile operators will invest $0.5 trillion in mobile capex worldwide between 2018 and 2020."

For those companies developing Internet of Things (IoT) products and solutions, they will appreciate the report's assertion that IoT "connections (cellular and non-cellular) will increase more than threefold worldwide between 2017 and 2025, reaching 25 billion." What is more, "While IoT is rapidly becoming a mainstream technology in some consumer markets such as consumer electronics and smart homes, the industrial IoT segment is still in its infancy – but is set to be the largest source of connections growth going forward. Globally, the industrial connections base will overtake consumer IoT connections in 2023."

Investors and entrepreneurs alike will rejoice knowing that "growth in IoT will be driven by a proliferation of uses cases for smart homes, cities, buildings and enterprises, as well as rising investor financing and a supportive ecosystem for innovation.

With respect to mobile contributing to economic growth and addressing social challenges:

In 2017, mobile technologies and services generated 4.5% of GDP globally, a contribution that amounted to $3.6 trillion of economic value added. By 2022, this contribution will reach $4.6 trillion, or 5% of GDP, as countries around the globe increasingly benefit from the improvements in productivity and efficiency brought about by increased take-up of mobile services and M2M/IoT solutions. In 2017, the wider mobile ecosystem also supported a total of 29 million jobs (directly and indirectly) and made a substantial contribution to the funding of the public sector, with almost $500 billion raised through general taxation and $25 billion through mobile spectrum auctions.

As well as contributing to economic growth, mobile technology is increasingly used for disaster preparedness and response, and to help address the challenges of access, cost and quality of service in key industries, including healthcare, agriculture, utilities, education and financial services. Two years into the 2030 Agenda for Sustainable Development, the mobile industry is increasing its impact across all the 17 SDGs as a result of wider mobile reach and better networks. There is also growing adoption of mobile-based tools and solutions that aim to spur the digitization of systems, processes and interactions across a number of industries, especially in low- and middle-income countries. Agriculture and healthcare are notable examples.

Regarding the investment side of the mobile technology industry, "Globally, private equity companies, venture-capital firms and corporates have invested $1.2 trillion over the last five years to finance tech start-ups and emerging companies in a range of sectors, with an all-time record level of financing in 2017. This continues to support innovation and development in technology areas such as IoT, augmented reality (AR), virtual reality (VR), networks, autonomous vehicles and the wider area of artificial intelligence (AI)."

Knowing that entrepreneurs, irrespective of where they reside, are always in need of capital as well collaborative partners to scale their business, I appreciate that the report says "recent trends and initiatives also show increasing corporate venture capital (CVC) activity among operators in both developed and developing markets, to drive innovation and in some cases moves into new business lines such as media, content and fintech. Across Asia Pacific and Africa, collaboration between mobile operators and start-ups is gaining momentum as operators have the scale and reach that start-ups lack, while start-ups have the local innovation that operators need."

Addressing the important topic of artificial intelligence, I support the assertion that "there is widespread recognition that AI will be key to future business and digital transformation as well as driving increasingly autonomous and intelligent networks and improving the customer experience through better understanding of customer behavior."

Finally, the report points out that "as emerging technologies – including AI, IoT and advanced data analytics – converge, 5G could play an enabling role in realizing their full potential. For example, IoT will require both more pervasive intelligence and a ubiquitous connectivity layer to allow devices to communicate and to support the provision of data analytics and intelligence on-demand. Looking ahead, we expect this convergence to intensify, with AI increasingly integrated into a growing number of IoT applications and services as well as networks."

How are you positioning your business to take advantage of emerging technologies such as IoT, AR, VR or AI?

Aaron Rose is a board member, corporate advisor, and co-founder of great companies. He also serves as the editor of Solutions for a Sustainable World.
Posted by Aaron Rose at 10:24 PM