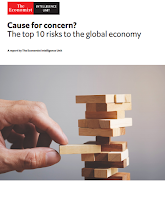 "There has arguably never been a greater disconnect between the apparent strength of the global economy and the magnitude of geopolitical, financial and operational risks that organisations are facing," says a report published by The Economist Intelligence Unit (The EIU). Entitled Cause for concern? The top 10 risks to the global economy, the report identifies and assesses "the top ten risks to the global political and economic order. Each of the risks is not only outlined, but also rated in terms of its likelihood and its potential impact on the global economy."

The report explains that "when measuring risk to the global economy it is of little surprise to see many potential challenges emerging from the world’s largest economies. The Economist Intelligence Unit sees a number of risks, with their roots in the US, China and the EU. However, these risks are not limited to those geographies alone, and how they could morph into threats that destabilize large parts of the world is detailed in the following pages. In addition, there are risks that either come from smaller regional hotspots, or are global in nature. Again, we look at how they could evolve in the coming years and what that would mean for transnational organizations." 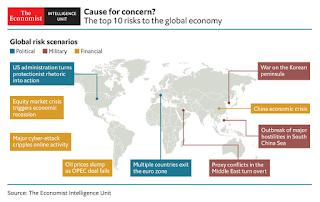 Each risk, ranked in order of intensity, is listed below followed by The EIU's conclusion of its analysis (I recommend reading the report in its entirety for The EIU's complete analysis of each risk):

"The global economy is moving into a new phase, where more and more central banks will begin to wind down or reverse their loose monetary policy positions in response to vigorous growth rates, giving rise to significant uncertainty."

2. Global trade slumps as US steps up protectionist policies

"Any ramp-up in protectionism would certainly have repercussions beyond North America and China. Prices and availability for US and Chinese products in the supply chains of companies from other nations would be badly affected. Consequently, global growth would be notably curtailed as investment and consumer spending fall back."

3. Territorial disputes in the South China Sea lead to an outbreak of hostilities

"Were military clashes to occur, the economic consequences would be significant. Economic growth would suffer, and regional supply networks and major sea lanes could be disrupted."

"A broad-based acceleration in growth would not only provide welcome relief to slow-growing countries elsewhere but could also assist in any longer-term economic rebalancing in China, making the whole process less painful. An improvement in global demand would provide further support for commodity prices, adding to an economically virtuous circle for commodity exporters in Latin America, the Middle East and Sub-Saharan Africa."

"Were government activities to be severely constrained by an attack, or physical infrastructure damaged, the impact on economic growth would be even more severe. On the positive side, the recent attacks have highlighted that in many cases the impact can be mitigated by fairly basic cyber-security techniques. However, if these attacks represent a test bed, worse could easily follow."

"If the Chinese government is unable to prevent a disorderly downward economic spiral, this would lead to much lower global commodity prices, particularly in metals. This, in turn, would have a detrimental effect on the Latin American, Middle Eastern and Sub-Saharan African economies that had benefited from the earlier Chinese-driven boom in commodity prices. In addition, given the growing dependence of Western manufacturers and retailers on demand in China and other emerging markets, a disorderly slump in Chinese growth would have a severe global impact—far more than would have been the case in earlier decades."

7. There is a major military confrontation on the Korean Peninsula

"The US's position is the most fluid. A pivot from aggression to containment is likely in the medium term, but before then the risk of a US attack aimed at damaging North Korea’s military capabilities is growing."

"In the worst-case scenario, these proxy battles could lead to wider conflict in the Gulf region, potentially pitting Saudi Arabia and Iran directly against each other, shutting down the Strait of Hormuz and crippling global energy markets. In a period when we already expect global oil stockpiles to be falling, any disruption to supply from the Gulf would quickly translate into a surge in prices and would consequently hit global economic growth prospects severely."

9. Oil prices fall significantly after the OPEC deal to curb production breaks down

"Having only recently started to recover from the 2014-16 downturn, oil prices would be hit hard by a sudden, large increase in crude production, and some countries would face serious balance-of-payments shocks. Developing nations, including Nigeria and Angola, would face serious debt distress, and possibly also political and social instability."

"If more countries were to leave the euro zone, the global economy would be destabilized. Countries leaving the zone under duress would suffer large currency devaluations and be unable to service eurodenominated debts. In turn, banks would suffer huge losses on their sovereign bond portfolios and the global economy could be plunged into recession." 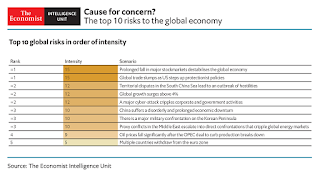 I was asked by a colleague about which of the ten risks worry me the most. "It depends" was probably not the answer she was looking for. As reflected in the image above, The EIU does not rate each risk with the same intensity. A business's specific sector focus or geographic market, however, may be vulnerable to certain risks.

Multiple countries withdrawing from the euro zone will post a significant risk for businesses operating in the the monetary union of 19 of the 28 European Union member states which have adopted the euro as their common currency and sole legal tender. Given China's economic importance to the global economy, a slowdown in the Middle Kingdom's economy will have a negative ripple effect in developed and developing markets alike.

Any military conflict or cyber-attack will adversely impact the global economy in ways that many cannot anticipate. And while they may curry favor with a specific political electorate, protectionist policies will certainly not produce the desired results. In fact, such policies could reduce investment and consumer spending.

Which of the ten risks concern you the most with respect to your business?

Aaron Rose is an advisor to talented entrepreneurs and co-founder of great companies. He also serves as the editor of Solutions for a Sustainable World.
Posted by Aaron Rose at 5:28 PM