EIU Report Says Trade Must Be a Central Part of the Solution if the World Is to Restrict Global Warming to 1.5°C 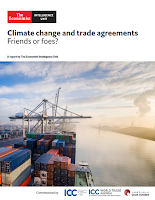 "If the world is to restrict global warming to 1.5°C, trade must be a central part of the solution," concludes a report published by The Economist Intelligence Unit (The EIU). Commissioned by the International Chamber of Commerce (ICC), as part of the ICC World Trade Agenda, an initiative in partnership with Qatar Chamber of Commerce and Industry, the report, Climate change and trade agreements: Friends or foes? further says that "it will be impossible for countries to meet their ambitious Paris Agreement targets without strong and coherent trade and environmental policies."

It is widely know that the world needs transformative solutions to reduce greenhouse gases (GHG). The report explains, however, that "[i]n climate policy discussions, relatively little attention is paid to the global trade architecture. Bilateral, regional or World Trade Organisation (WTO) trade agreements could help to meet climate goals—for example, by removing tariffs and harmonizing standards on environmental goods and services, and eliminating distortionary and poorly designed subsidies on fossil fuels and agriculture."

Moreover, "Despite the potential for trade–climate synergies, the weight of historical evidence is heavy in the other direction. Universal tariff reduction has increased trade in carbon-intensive and environmentally destructive products, such as fossil fuels and timber, more than it has for environmental goods. In some cases FTAs can also shrink the 'policy space' available to countries to pursue environmental goals, for example if they prohibit, or are perceived to prohibit, a country's ability to distinguish between products according to emissions released during their production." 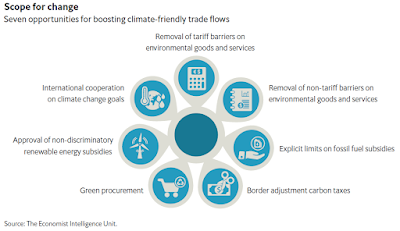 The report finds "that the four contemporary trade agreements are more supportive of these climate goals than their traditional counterparts. The EIU also finds "that the WTO’s efforts to pursue climate and environmental goals have largely stalled and its cooperation with international climate policy actors is limited. Post-Paris there is a real concern that ambitious climate policies will fall foul of WTO rules if they are perceived to arbitrarily or unjustifiably discriminate against third countries."

The report provides recommendations for domestic and global policymakers including "transmitting and strengthening best practices from recent trade agreements and increasing WTO–UNFCCC (United Nations Framework Convention on Climate Change) cooperation." Furthermore, "To truly align the global climate and trade architecture," The EIU recommends "discussing the introduction of a 'climate waiver' that would permit countries to impose trade-restrictive climate policy response measures that are in line with Paris Agreement obligations."

Do you agree that trade must be a central part of the solution if the world is to restrict global warming to 1.5°C?

Aaron Rose is an advisor to talented entrepreneurs and co-founder of great companies. He also serves as the editor of Solutions for a Sustainable World.
Posted by Aaron Rose at 11:05 PM