A post that I published in this forum in 2008 focuses on a project my colleagues and I developed in utilizing information and communications technology (ICT) to implement social and economic development initiatives in the Federated States of Micronesia (FSM). One significant outcome of our proposal was to create a digital strategy to be incorporated into the FSM's national development strategy. Eleven years later, I read with great interest a report, The Mobile Economy Pacific Islands 2019, that says "[m]obile technology can play a pivotal role in the digital transformation of the Pacific Islands, enabling access to life-enhancing services in areas such as health and education, while proving a catalyst for innovation and economic growth, with the promise of new jobs and increased tax revenues."

Authored by GSMA Intelligence, the research arm of the UK-based GSMA, below are the report's findings:
The report encouragingly explains: "Mobile phones are bringing internet access to previously unconnected populations across the world, particularly in developing regions such as the Pacific Islands where there is a lack of alternative access technologies."

However, "Countries across the Pacific Islands still face significant challenges around funding infrastructure to provide mobile and internet access to their populations, which in turn reduces the ability of governments and policy-makers to address social and economic challenges. Providing mobile coverage is a particular challenge in a region often described as 'sea locked,' with large segments of the population living in remote and often inaccessible areas."

Further on the topic of the challenges of mobile connectivity in the Pacific Islands, the report notes:


There are many aspects of our 2008 proposal remain relevant in 2019 of using mobile technology as a pivotal role in the digital transformation of the FSM and throughout the Pacific Islands. Specifically, with the expansion of mobile technology, Pacific Islanders will be able to access digital health (mHealth), education, and financial technology (fintech) services. This presents a great opportunity for technology developers and investors to collaborate and support local small businesses. 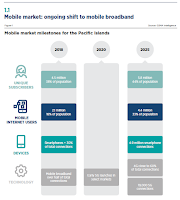 In addition, with an early roll out of 5G services in 2020 and a projected 19,000 5G connections in 2025 (see left chart), frontier technologies such as artificial intelligence, blockchain, IoT and advanced data analytics will become available. "The Pacific Islands region might not be one of the first to roll out 5G services but it can benefit from a mature ecosystem and global economies of scale to see 5G develop in the same way as LTE has done in the region. New submarine cables with improved capacity and other technical advancements are setting the stage for advanced broadband services, including 5G."

What online content and services are you developing that are accessible and relevant to Pacific Islanders?

Aaron Rose is a board member, corporate advisor, and co-founder of great companies. He also serves as the editor of GT Perspectives, an online forum focused on turning perspective into opportunity.
Posted by Aaron Rose at 1:11 AM