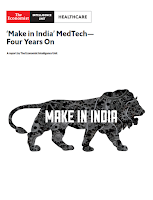 "In September 2014, the 'Make in India' initiative was started with the objective of making India an international hub for high-value technology goods," explains a report published by The Economist Intelligence Unit (The EIU). "The campaign also aimed to bring in foreign technology and capital into India and to bring self-sufficiency through domestic supply. Out of 25 shortlisted focus sectors, medical technology (medtech) is one of the sectors targeted for this initiative given its current high import intensity."

'Make in India' MedTech - Four Years On adds: "Following the launch of the 'Make in India' initiative, the Department of Pharmaceuticals (DoP) commissioned a task force to identify and promote domestic production of high-tech medical devices and facilitate the industry. In essence, in line with the 'Make in India' initiative, the task force was charged with the mandate of bringing self-sufficiency through domestic support and develop India as a Global medical device manufacturing hub."

The EIU's "report explores how 'Make in India' has impacted the country and the emerging opportunities for medtech multinationals (MNCs)."

On the topic of incentives and policies, "To build upon the initial momentum generated, the India government has committed to numerous other efforts in an attempt to make 'Make in India' an attractive proposition for the medtech industry." Furthermore, "To better align domestic development and manufacturing of medical devices with global practices, India's Ministry of Health and Family Welfare released the Medical Device Rules of 2017 (MDR 2017 or the Act) which took effect on January 1, 2018. The structure of the new regulatory paradigm appears to be on par with international standards, including the European Union's Medical Device Regulation, although the extent of these similarities will depend upon India’s implementation of the Act." 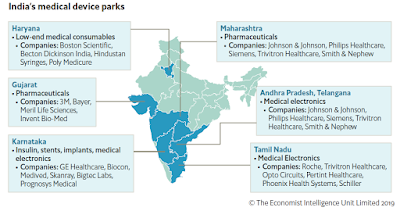 Moreover, "In December 2018, the India government announced that it will set up the National Medical Devices Promotion Council (NMDPC) to boost manufacturing, attract investments and promote exports of the sector. While the medical devices industry has been growing in double digits, it is predominantly import-driven with imports accounting for over 70% of the domestic market and around 80% of critical-care medical devices such as cardiac monitors and ventilators. The setting up of NMDPC will address the issue of expansion of domestic manufacturing for critical-care devices.

"Specifically for medical devices, a slew of incentives were subsequently offered to stimulate interest in the sector" as represented in the chart below.

While there has been a positive impact in several areas after much effort in reforming infrastructure, policy and processes, the results are "below expectation in the manufacturing industry which the ‘Make in India’ initiative mainly targets at.

"Current economic data suggests that the impact of ‘Make in India’ has been lackluster and the initiative is a long way behind its intended target. Through the ‘Make in India’ initiative, Prime Minister Modi hoped to raise the share of manufacturing as a percentage of gross domestic product (GDP) to 25% by 2025, and create 100 million new jobs by 2022.

"However, GDP growth slowed between 2017 and 2018, with the manufacturing sector's contribution to GDP showing no increase. On the jobs front, published data from the World Bank records 5.5 million new jobs created yearly—hardly sufficient to catch up to the goal of 100 million new jobs by 2022."

With respect to medtech MNCs capitalizing on the country's growing medtech industry, the report says:

Unlike global manufacturing giant China, India lacks adequate infrastructure, the right set of know-how and an ecosystem to support MNCs in the 'Make in India' initiative. The prevailing perception among MNCs sees India as a hub for low-cost, entry-level products catered towards emerging markets. In 2007, medtech MNC Stryker opened an R&D hub in Gurgaon and its second facility the very next year. Stryker continues to bank on India R&D to gain edge in emerging markets. R&D at these facilities are aimed at catering to mid-tiered consumers of the value, no-frill devices segment.

While most MNCs already operating in India may not have plans for aggressive local expansion, there are a number of medtech companies such as GE Healthcare, Philips Healthcare and Intuitive Surgical that have jumped on the 'Make in India' initiative. It seems companies that have already established a significant footprint in India or want to cap its future based on Indian demographic needs might be interested to invest despite setbacks from the ecosystem in the country.

Perhaps India will begin to see positive results in the coming years. As The EIU explains:

In September 2018 the government officially launched the ambitious Pradhan Mantri Jan Arogya Abhiyan or the Ayushman Bharat National Health Protection Scheme (AB-PMJAY), which it describes as the world's largest government-funded healthcare program. The scheme will provide health insurance cover of up to Rs500,000 (US$7,400) a year to 500 million low-income beneficiaries, aiming to cover 40% of the population. To date, AB-PMJAY is the boldest national health insurance plan in India's history, providing more people with greater coverage than any previous program. While current implementation remains at a nascent stage, this plan has the potential to generate huge demand for medical technology.

The report concludes by noting:

With the 'Make in India' campaign, the government intends to manufacture high-tech cost competitive products locally. While progress since inception has been below par, the government's continued efforts show its commitment in driving this plan to fruition. The recent launch of the Ayushman Bharat National Health Insurance is likely to further propel domestic access and demand for healthcare products and services. For medtech MNCs, there are potential synergies that can be unlocked should they explore manufacturing in India. However, careful considerations need to be taken in evaluating the most appropriate strategy for medtech companies looking for opportunities in 'Make in India.'

What investment or business opportunities are you seeing in India's medtech industry?