China's Three Major 'Icebergs' That Businesses, Investors and Strategists Should Put on Their Radar 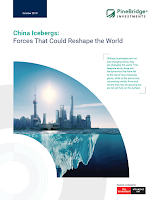 Doing business in China over the past several years, I can attest to The Economist Intelligence Unit's assertion: "Chinese businesses are not just changing China, they are changing the world."

While doing business in China carries a great number of risks (e.g., government regulations, intellectual property protection, and foreign exchange risk), I often encourage startups based outside of China to consider commercializing their products or services in the world's most populated country. In fact, The EIU "projects that 480m Chinese consumers (more than the whole of the US population) should reach upper-middle and high-income status by 2030. Amid continued urbanization, China’s lower tiers (smaller and less developed cities) are likely to be growth dynamos as investment and capital fan out from tier-1 cities such as Shanghai, Beijing and Guangzhou."

Sponsored by PineBridge Investments, an American private, global asset manager, China icebergs: Forces that could reshape the world "examines hidden strengths in the Chinese economy—'icebergs'—that existing and potential investors into the world's second-largest economy should be watching."

The report's executive summary explains that the U.S. "may have held its position as the world's largest economy since 1871, but in the 1820s the world's economic powerhouse was China, at almost 20 times the size of US GDP. China's decline began in the 19th century and lasted until the country's economic reforms that began in 1979. Since then, China has rapidly re-emerged as a major economy."


Moreover, "China's boom has helped fuel global growth, but it has also raised the country's debt levels and prompted questions about economic endurance and global impact. Trends may be visible on the surface, but, like an iceberg, bigger implications lie underneath. To get a better understanding, this report aims to go below headline numbers and explore the nation’s commercial strengths and potential weaknesses."

Key takeaways of the report include:

The report correctly addresses the challenges Chinese tech companies have encountered in their expansion beyond their home market: "China's size and room for growth have satisfied most domestic tech firms to date, but they still look to expand overseas. However, this presents a more complicated landscape, with trade tensions morphing into tech disputes, with the US in particular, and regulatory tightening in the EU, Australia and Japan.

"Challenges include the complexity of local markets. Chinese companies going abroad must find ways to localize, and use local talent, but some market segments may prove beyond their capabilities."

The report adds, however, that "[s]crutiny of Chinese technology in the West may push Chinese companies towards more-welcoming developing nations, particularly within the Belt and Road sphere. The result could see Chinese capital and technology catalyze development there, just as US and European capital spurred economic development in China through the 1980s and 1990s.

"US companies like Microsoft or IBM have dominated global markets on the strength of their products and services for decades. Today, more Chinese firms are reaching that level, as Fortune's Global 500 list illustrates. Given the speed with which China has become the second-largest economy, and is pursuing technologies of the future, it would be a mistake to underestimate the odds of its top companies also becoming global leaders."

What do you think?

Aaron Rose is a board member, corporate advisor, and co-founder of great companies. He also serves as the editor of GT Perspectives, an online forum focused on turning perspective into opportunity.
Posted by Aaron Rose at 1:32 AM