Report Outlines the Prospects for Unrest in Latin America Throughout 2020 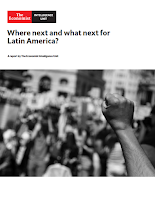 "Latin America is by no means a stranger to social unrest and political turmoil. Yet, even by historical standards, 2019 has proved to be an extremely volatile year for the land of the cacerolazo," says a report published by The Economist Intelligence Unit (The EIU). "Governments across the region, irrespective of their ideological leanings, have had to deal with the backlash of a public whose tolerance for the status quo has all but disappeared."

In its report entitled Where next and what next for Latin America? The EIU "outlines the prospects for unrest in Latin America throughout 2020, assessing the stress points that might trigger fresh instability in the year to come, and taking a closer look at countries hit by unrest in 2019 or at risk of unrest in 2020."

The report explains: "To assess the risk of unrest in the region, The Economist Intelligence Unit has produced a political instability heat map, which assesses the key drivers of unrest in the region, and which shows that the country with the greatest number of potential flashpoints in 2020 is Nicaragua (Venezuela was excluded from the sample owing to inadequate data availability), followed by Guatemala, Brazil, Honduras, Chile, Mexico and Paraguay. Uruguay, by some distance, stands out as the country with the fewest potential flashpoints for unrest."

Moreover, "Taking a closer look at the heat map," The EIU considers "the following indicators to be among the most relevant in determining the likelihood of social unrest in the region.

The report also includes a section where The EIU takes "a closer look at some of the major countries in Latin America, including a number of countries that have struggled with unrest in 2019 and several countries that are in theory at risk of unrest in 2020, to assess what might happen next."

Is the risk of social unrest in Latin America adversely affecting your company's operations or anticipated plans to conduct business in the region?

Aaron Rose is a board member, corporate advisor, and co-founder of great companies. He also serves as the editor of Solutions for a Sustainable World.
Posted by Aaron Rose at 1:00 AM