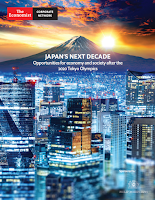 "Japan is back—and in the spotlight," proclaims the Economist Corporate Network (ECN) in a report entitled Japan's next decade: Opportunities for economy and society after the 2020 Tokyo Olympics. "Perceived as a laggard for decades, it is finally receiving attention, if not for staggering GDP growth, then as an example of how to deal with the population-related issues that many countries will face sooner or later."

Sponsored by Philip Morris Japan, the report notes that the "2020 Summer Olympic and Paralympic Games in Tokyo are playing a central role in the narrative of Japan's revitalization. The direct economic benefits of this iconic event are forecast to range from ¥30trn (US$282bn) to ¥32trn or around 0.6% of real GDP. The Olympic Games are also viewed by business executives as a great opportunity to boost morale and visibility, to 'catapult the host city into the premier league of cities,'" according to a report that looks into the economic impact of the Olympics.

Moreover, "The cumulative effect of the Olympics brings more important results than simply faster GDP growth. Olympic euphoria has developed into a new national idea, driving the country and its economy forward. 'The Olympics will be a great catalyst, showcasing all of the great things about Japan and Japanese society. There will be a huge positive effect from an incoming tourism point of view, but there is also domestic excitement, that will be created as well,' says Randall G. Wada, CEO of JLT Holdings Japan."

The report encouragingly explains that "this positive trend does not have to stop when the lights go off after the closing ceremony. The legacy created by the Olympics should be enough for the country to start building what we call Japan's next decade" as opposed to the 'lost decades' of economic stagnation in the 1990s and 2000s.

There are challenges, however, such as a rapidly aging population that may adversely impact Japan's next decade. "The statistics are well known: by 2030, more than 30% of Japan’s population—nearly every third person—will be over 65. This is unprecedented in world history. The Japanese government and people are concerned as to whether their society is sustainable with such a demographic structure."

What is more, "The Economist’s Glass Ceiling Index consistently ranks Japan as one of the worst environments for working women among OECD countries." In a chapter on driving growth through diversity and inclusion, the report says "improving conditions for working women and promoting 'total diversity' are crucial for Japan's next decade and beyond. The economic potential is huge, and the socio-demographic implications could benefit society as a whole."

Based on desk research and consultation with experts in Tokyo, the report's key findings include:

The report concludes that "[d]espite serious challenges, Japan has immense potential for the future. If put together, the opportunities around the silver market, increased productivity and diversity promotion could bring the national economy to a much larger size than the government's current target of ¥600trn. This would require more than new programs by the Cabinet Office new strategies by business, however; a shift in perspective and change of mindset are needed to see the risks as opportunities to be realized by society as a whole."

Is your business planning to establish or expand its operations in Japan in the next decade?

Aaron Rose is a board member, corporate advisor, and co-founder of great companies. He also serves as the editor of GT Perspectives, an online forum focused on turning perspective into opportunity.
Posted by Aaron Rose at 1:48 PM