"Access to the internet will no longer be a problem in a few years." This was a claim I made during a during a recent conversation with a representative from Re+connect, a social venture developing a civic technology solution that closes the last-mile disaster relief gaps and builds long-term resilience for underserved communities, and a manager at the Puerto Rico Science, Technology & Research Trust, an organization whose mission is to invest, facilitate and build capacity to continually advance Puerto Rico's economy and its citizens' well-being through innovation-driven enterprises, science and technology and its industrial base. The success of the mobile application Ms. Qin and her colleagues are developing for people living in Puerto Rico's rural and remote areas depends on having uninterrupted access to wireless internet.
Whether designed to help people living in the United States, Afghanistan or somewhere in between, having regular access to the internet is crucial to delivering valuable technology-based services. However, there are large swaths of areas globally where internet service is not available. But recent and continuing advances in satellite broadband will greatly reduce (and hopefully eliminate) the digital divide, which is the gulf between those who have ready access to the internet and those who do not.
According to a report written by Tim Hatt, Head of Research and Consulting at GSMA, a UK-based organization representing the interests of mobile operators worldwide, with support by OneWeb, Intellian and SoftBank, "Satellite broadband continues to undergo a period of reinvention through the low Earth orbit (LEO) constellation model that re-emerged five years ago from OneWeb, SpaceX and a range of other participants. Momentum and industry traction have been underpinned by a reduced cost structure and higher performance capability relative to legacy geostationary satellites that operate at much higher altitudes." The report notes that a "separate mode of aerial connectivity called high-altitude platform stations (HAPS) is also in development, albeit at an earlier stage and further away from commercial deployment."
Segmented into four chapters beginning with "Bridging a large and persistent internet divide," the report explains that "[w]hat is driving the push for satellite and broader aerial connectivity has not changed: the size and persistence of the internet divide and the consequential – but less appreciated – connectivity barriers for businesses in rural areas." Moreover, "Given that internet access is near ubiquitous in most western countries, it can be easy to forget that on a global scale, penetration is only 50%. This leaves around 3.7 billion people (or 3 billion adults) offline; we forecast that continued network expansion and smartphone price declines will help bring this down over the next five years but only to 3 billion, leaving 40% of the world still offline. The vast majority of unconnected individuals live in India, Africa and a handful of populous, lower-income Asian countries such as Pakistan and Indonesia (see Figure 2)." 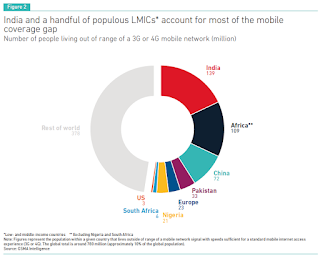 In the chapter entitled "Connectivity from space: under the hood," the report explains that the "basic model for LEO constellations is to integrate with mobile operator networks: 3G, LTE and eventually 5G. The major change with LEO constellations compared to traditional GEO architectures, which primarily connect to slower-speed 2G and 3G networks, is a lower deployment altitude to drive higher data throughput and lower latencies."
"Providing network coverage and backhaul links to rural areas is foremost a challenge of economics rather than anything to do with technology," the third chapter points out. "Large distances, uneven topography and the presence of impediments such as forests all make rural coverage more difficult than in urban or suburban areas. Low population densities also mean that usage and revenue per mobile cell site (or broadband exchange point) are much lower than in a city or suburban environment."
Outlining the differences between wholesale versus retail business models with satellite and HAPS connectivity is the focus of the report's final chapter. "The first and most common is connectivity provided on a wholesale basis to mobile operators, which continue to own the end-customer relationship. The second is to sell access directly to consumers or enterprise customers."
Addressing the future outlook, I appreciate the report's concluding paragraph:

We expect current market momentum for LEO connectivity to continue as established constellations increase towards their target size. Forming commercial partnerships with operators will be key over the next 2–3 years to test and deploy aerial solutions in practice, providing feedback loops to inform tech and business model iterations. To a certain extent, regulatory issues surrounding spectrum licensing will persist, albeit to a lesser extent given progress over the last five years. Operators will also need to focus on infrastructure deployment logistics in rural areas as part of a wider package of educational support for such communities. Coverage is, after all, one of several barriers to mobile internet and broadband access along with costs, digital literacy and relevance. Tying these together through joined-up efforts is most likely to result in success rather than tackling each in isolation.

Accessing the internet through aerial connectivity is not a new concept. Such connectivity has historically been cost-prohibitive for most enterprises and individuals. Encouragingly, recent reductions in research and development costs leading to advances in satellite – low Earth orbit and geostationary orbit – and the newer high-altitude platform station technology is altering business models that will allow operators to provide reliable low-cost internet service to those living in unconnected or poorly-connected areas. The end result is delivering mobile solutions like those created by Re+connect that closes the last-mile disaster relief gap.
What recommendations do you have for improving internet connectivity to close the digital divide?
Aaron Rose is a board member, corporate advisor, and co-founder of great companies. He also serves as the editor of GT Perspectives, an online forum focused on turning perspective into opportunity.
Posted by Aaron Rose at 1:23 PM