Resourcefulness, Self-Motivation, and Resilience: Character Traits Required for a Successful Journey as an Entrepreneur

"Entrepreneurship is hard" are the words I hear often from friends who mad the jump into the turbulent world of business ownership. And more of my friends, whether residing in the United States or abroad, took the plunge recently as unemployment soared as a result a pandemic mitigation measures including small businesses closing their doors. In the U.S., "pandemic entrepreneurship took off at unprecedented levels, leading to the largest increase in new business applications in recorded history," according to the U.S. Chamber of Commerce. "In 2020 over 400,000 start-ups were formed in the UK," Island Echo noted. Impressively, "around 80 new businesses" in the UK were formed per hour in the first half of 2021. Many of these entrepreneurs are experiencing the difficulty of transitioning from the corporate world to being your own boss.
CNBC published an article about a woman's transition from corporate employee to launching her own business. "For more than a year," Giselle Sitdykova, aged 45, "had been working from home in Oak Park, California, as an analytics manager for a mortgage company. Remote work suddenly gave her four hours back to her day free of commuting and shuttling her 11-year-old son to and from school. With more time and energy, she launched her own company: Dwellics, a website that gives personal recommendations for people planning to move."
The article adds: "By the summer of 2021, Sitdykova's employer planned to bring everyone back to the office. Not ready to give up on her own business, Sitdykova joined the Great Resignation and quit her job. The act was 'freeing,' she tells CNBC Make It: 'I feel like I can take life back into my own hands.'"

Discussing the stresses of entrepreneurship, the article explains that "It was also hard to shift her mindset from working for a big company to suddenly being on her own. 'I always associated myself with my job title, salary and being in the corporate environment,' Sitdykova says. 'Suddenly, I had no title, no salary, and my new business didn't have a name yet. It's like moving from a nice house to an empty lot and starting to build from the foundation up, where you hope that at some point what you build will be bigger than the house you once had.' She worked non-stop through the stress and uncertainty for weeks."
Randi Boyette, founder of Spark Medical Marketing Inc., a Florida-based digital marketing firm that helps take medical and aesthetics brands into the digital marketing space with a team of experts, gave an interview about her journey from corporate executive to business owner. Ms. Boyette, who is the daughter of my good friend and advisor, Ted Felix, begins the interview by saying that as a child growing up in New Jersey, her father "worked around the clock to provide for our family. I often wondered as a child why my dad wasn't around all the time, but as I grew up and understood his goals as an entrepreneur, it became a foundation for my own work ethic. He did whatever it took to achieve success, which set up our family to have everything we needed. His drive was instilled in me, and today he plays a role in my business." 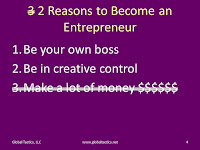 Responding to why she decided to launch her own business, Ms. Boyette said, "After working in corporate America for many years, I realized I wanted more control over my schedule, success and personal life. I had learned so much [in the corporate world], but I was looking for a change." Her words resonate with me as I often advise people who are considering launching their own business to consider the reasons for doing so. Being your own boss and maintaining creative control are two key reasons. However, given that over 50 percent majority of businesses fail during their first few years of existence, making a lot of money should not be part of the equation for becoming an entrepreneur. As Mark Organ, an entrepreneur and consultant, writes: "The most successful entrepreneurs are not motivated by money. It's about the experience, the way of life, the chase, the identity, the rush. ... Entrepreneurship is not a job, or a get-rich-quick scheme. It's a journey."
Resourcefulness, self-motivation, and resilience are three character traits Ms. Boyette says are most instrumental to her successful journey as an entrepreneur. With respect to the first, "Anytime I am presented with an opportunity, the answer is always yes. I might not always know how to do something and might be faced with a challenge, but I always figure out a way to make it happen."
Regarding self-motivation, Ms. Boyette insightfully explains that "Being an entrepreneur can be challenging, especially in the beginning. You are the only one pushing yourself on the good days and the bad, it's critical to motivate yourself every day. No matter how little sleep I have had, as we work many late nights, I wake up motivated by the fact that our entire team is depending on me to do what I do to keep the business alive."
As for resilience, she notes: "I had many doors slammed in my face while growing Spark. I thought it was the biggest curse at the time, but I kept going. No matter how many times I was told 'no,' I persevered. Resilience is a character trait critical to success, not only in a career but also in life." 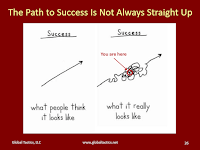 When I first met Ted, who has served as one of my most valuable advisors since 1998, he advised me on the importance of having a business plan (a topic that is often discussed on this forum). I recall an early conversation where he said that the path to success is not always straight up. Serving as a road map, a business plan will help entrepreneurs navigate their path to success.
For most business owners, stress and uncertainty is present throughout the entire duration of owning a business. Another trusted advisor told me when first entered into the foray of entrepreneurship that if you are not putting out fires on a regular basis, then your business is not growing. Author and entrepreneur, Neil Patel, adds that growing your business is "freaking terrifying. Scaling your business to great heights will require you to learn new skills, hire and lead a team, and get so far out of your comfort zone that you risk a mental breakdown."
In an article published by Forbes, Yusuf Berkan Altun, a Forbes Councils Member, wrote: "Such a natural accelerator of startups as the pandemic has undoubtedly had a positive effect on the global economy. These developments on the individual entrepreneurship level are likely to aid numerous economies to quickly defeat the consequences of the pandemic. However, at the same time, some of the newly formed enterprises may not be able to withstand competition or find an application and are likely to quickly go bankrupt."
Having been an entrepreneur for close to 30 years, I agree that "entrepreneurship is hard." While the journey is not easy, a comprehensive business plan along with character traits including resourcefulness, self-motivation, and resilience, the path to success will be a bit less treacherous.
What character traits do you think are necessary to leading a successful business? How do you deal with the stresses of owning a business?
Aaron Rose is a board member, corporate advisor, and co-founder of great companies. He also serves as the editor of GT Perspectives, an online forum focused on turning perspective into opportunity.
Posted by Aaron Rose at 12:50 PM