Understanding How the War in Ukraine Will Change Business 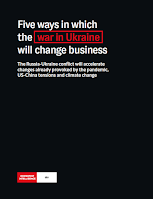 Since Russia's unprovoked invasion of Ukraine on Feb. 24th, 2022, I have held several conversations with colleagues asking how the war will change business. A report published by The Economist Intelligence Unit (The EIU) aims to address this question by noting: "Although primarily a humanitarian disaster, the Russia-Ukraine conflict will also accelerate changes already provoked by the pandemic, US-China tensions and climate change."
The EIU presents five ways in which the war in Ukraine will change business:
Among the five points presented by The EIU, three are worth exploring more deeply. "Supply chains have already been disrupted by the pandemic, as well as the earlier US-China trade war," the report says. "The difficulties caused by the Russia-Ukraine war will prolong these disruptions and place added pressure on companies in sectors such as automotive to shorten their supply chains and build resilience. This may mean increasing stock of major components, reining in just-in-time production norms or investing in more local suppliers."
As for price increases in commodities driving adoption of sustainable food policies, "The war in Ukraine will keep fuel and commodity prices elevated for much of the year. This will not only raise business costs, but will also heighten existing concerns about energy and food security." Moreover, "The war is already forcing several governments to examine their food and agricultural policies closely, not just in Europe, but also in the Middle East, Singapore and China, among others."
In a separate article, The EIU explains says it expects the "average grain prices to rise by almost a third this year, on top of the 40% increase recorded in 2021" and "prices of sunflower seed oil to increase rather than fall in 2022, as originally forecast before Russia's invasion; prices increased by nearly 60% in 2021."
With respect technology becoming increasingly geopolitical and regionalized, this is happening in two ways. "First," according to the report, "access to technology is seen as a competitive advantage for countries, as evident in US attitudes towards semiconductors. Because the chip sector is fragmented and the product is complex, every actor will need to use US equipment at some point; therefore, any US technology sanction makes a country or company unable to purchase semiconductors."
As for the second way, "the internet is becoming more national and less global. China has driven this change by using a national firewall to restrict access to content that its government deems dangerous—a measure that Russia wants to adopt. The EU, through its values-led approach to data privacy and regulation of artificial intelligence, has also created regional barriers to the internet."
However, the report importantly notes: "This regionalization of the internet will not necessarily lead to a 'splinternet,' where different systems are completely separate and not interoperable. The broader battle is between the US, which wants to retain the multistakeholder governance model of the internet (open, decentralized and industry-led), and China, which wants a cyber-sovereignty model (closed, centralized and country-led). However, the tensions are not just between democracies and autocracies, but also between blocs, as the relationship between the US and EU shows."
The EIU published a subsequent report presenting ten ways the war in Ukraine will change the world:
With respect to the first point of Russia's war bringing out a new division of Europe, The EIU points out that "Russia's brutal invasion aims to destroy Ukraine's sovereignty and prevent the country from ever joining NATO or the EU. Russia intends to annex at least part of Ukraine, thereby creating a buffer zone between Russia and the West that also includes Belarus and Kazakhstan." Moreover, "Russia's repudiation of the Western-led 'rules based order' signals a turning away from Europe and the creation of a new division of the continent, three decades after the fall of the Berlin Wall."
More troubling is how Russia's actions will accelerate the bifurcation of the world into two hostile, competing camps. As the report explains, "China and the West have been competing for several years to establish dominance in the industries and technologies of the future and to prepare the ground for a future decoupling. The coronavirus pandemic has reinforced this trend, fostering a move towards regionalization and away from globalization." What is more, "By bringing about a decisive rupture with the West, Russia's actions will speed up the division of the world between two rival poles. Some countries will take sides, but many others will seek to maintain a foot in both camps. As time goes on, this balancing act will become increasingly difficult." I appreciate how The EIU's first report explores the impact Russia's unprovoked war with Ukraine will have on key global industry sectors and the risks these present to businesses. The second analysis also serves as a useful tool in outlining how the conflict will influence the global balance of power and lead to a further unravelling of the post-Cold War order. The situation in eastern Europe has increased several risk factors businesses will need to navigate.
How is the war affecting your business?
Aaron Rose is a board member, corporate advisor, and co-founder of great companies. He also serves as the editor of GT Perspectives, an online forum focused on turning perspective into opportunity.
Posted by Aaron Rose at 9:31 PM