How to Reduce Africa's Reliance on Commodities 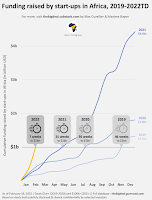 "Despite being home to 17% of the world's population, Africa is an underinvested market," a newsletter published by Morgan Stanley, a financial services firm, says. The newsletter also points out that "72% of investors surveyed do not currently invest there. We believe that despite near-term challenges, the continent offers compelling long-term opportunities vis-à-vis private markets and infrastructure."
Moreover, "Africa's median age, at 19.7, is considerably lower than those of Asia and South America, at 32.0 and 32.1, respectively. Furthermore, according to the World Economic Forum, Africa is expected to have the world's largest working-age population by 2034. The expected increase in the working-age population will likely promote middle class growth, building on trends already in place."
As an investor and entrepreneur, I appreciate how these statistics represent future opportunities. However, as an advisor to several officials representing African nations, I wish these leaders understood the importance of these statistics and the opportunity that exists for the citizens they represent. In my conversations with African government officials, I am often asked for my opinion on how to attract foreign direct investment to grow their private sector. While I strongly advocate for establishing policies and making investments to build a thriving digital economy in Africa, these officials mistakenly focus our conversation on how to increase their overdependence on raw materials and commodities such as minerals, oil, gas, and lumber.
Even The Economist notes that "many African economies have relied too much on raw materials for too long." The article further explains that "The UN defines a country as dependent on commodities if they are more than three-fifths of its physical exports. Fully 83% of African countries meet that threshold, up from 77% a decade ago. Some depend on produce such as tea, but most rely on mining or on pumping oil. When commodities crashed in 2015, foreign direct investment (FDI) and growth tumbled and have yet to fully recover."
The article importantly adds: "Broad averages obscure some of the progress that has been made to diversify economies. Over the past decade resources have become less important to GDP. The share of commodities in goods exports from the continent as a whole has fallen, too. And in countries such as Botswana and Malawi, services have grown strongly. Even manufacturing is rebounding."
However, "Africa has a long way to go if it is to break free of the resource curse. In countries rich in diamonds or oil, political power can be a license to loot. So unscrupulous folk are tempted to grab and hang on to it by any means available. Resource-rich countries are more likely to suffer dictatorships, and also tend to have more and longer civil wars."
Building a thriving economy while strengthening government institutions with better transparency and will require investments in education and infrastructure. Using Sierra Leone as an example, The Economist says the west Africa nation "now spends about 21% of its budget on education, up from 13% in 2017. As a result, more youngsters are passing their final exams than ever before. Mining began in Sierra Leone about a century ago. 'If we had invested in humans for a hundred years,' sighs David Moinina Sengeh, the education minister, 'we would be in a much better place today.'"
While I agree with the authors of Morgan Stanley's newsletter that many investors are missing out on lucrative opportunities in Africa, there is evidence this is changing. As reflected in the chart at the top of this post, African startups raised $4.4 billion in 2021, which was more than 2.5 times the amount raised in the previous year, according to "Africa: The Big Deal," a website managed by Max Cuvellier and Maxime Bayen.
With respect to specific sectors, fintech startups raised $2.3 billion from investors last year (see chart below). While this sector captured 53% of funds raised, other key sectors such as energy, retail, healthcare, education, and logistics and transportation are also on the rise.

I do not completely believe the notion that institutional investors in America or Europe are investing in African startups because they see the market as a great investment opportunity. Their investment is a result of chasing higher yields since the average junk-bond yields in America and Europe are 5.1% and 3.3%, respectively, well below inflation. And while there is good reason to cheer the recent increases in investments on the continent and the revenues some of these startups are reporting, I am still waiting for announcements of profitability and successful exits through an initial public offering or acquisition. Nevertheless, as someone who has supported tech startups in Africa for over 20 years, I am optimistic that the trend in the number of investors, amount raised, and overall number of startups on the continent will continue to grow for years to come.
I look forward to future conversations with government leaders in Africa on how to reduce their reliance on commodities by investing in education and infrastructure. Such investments will only help their growing working-age population enjoy the fruits of a middle-class lifestyle.
What opportunities and risks are you seeing in Africa's startup ecosystem?
Aaron Rose is a board member, corporate advisor, and co-founder of great companies. He also serves as the editor of GT Perspectives, an online forum focused on turning perspective into opportunity.
Posted by Aaron Rose at 11:47 PM