"At the end of 2021, the number of mobile internet users in Asia Pacific exceeded 1.2 billion, reflecting a penetration rate of just under 45% of the population," the GSMA notes in its annual report on the state of mobile economy in the Asia Pacific region. "This means that more than half of the population live in areas covered by a mobile broadband network but do not yet subscribe to a mobile internet service (usage gap)."
The UK-based organization, which represents the interests of mobile operators worldwide, adds that "The main reasons for the usage gap include the lack of digital skills (especially among older populations), lack of affordability among low-income households and online safety concerns among minority and vulnerable population groups. Addressing the usage gap for these key groups will extend the benefits of the internet and digital technology to more people in society. This requires concerted efforts by a broad range of stakeholders working together with mobile operators and other ecosystem players, such as device manufacturers and digital content creators."
The report's other key findings include:
In addition to providing significant economic value to the region's economy, "The mobile industry continues to deliver social impact across Asia Pacific, primarily by providing the connectivity that enables the growth of small businesses and digital transformation of enterprises, and granting access to life-enhancing services and tools for citizens," the report explains. "Mobile money is one example, with adoption scaling rapidly in parts of Asia Pacific as operators support the region’s shift to digital payments."
The report also mentions that "The metaverse ecosystem is growing in many countries around the world, including in Asia Pacific. This is demonstrated by the interest of public agencies and private enterprises in establishing a presence in the metaverse and actively utilizing the platform in their engagement with customers and other stakeholders." For example, "South Korea plans to spend at least $186.7 million to create its metaverse ecosystem, as part of the country's Digital New Deal." 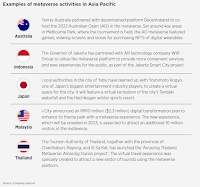 As highlighted in the image on right, the GSMA highlights how "Other governments in the Asia Pacific region, both at national and provincial levels, have outlined plans to harness the potential of the metaverse to increase the efficiency and quality of public services, as well as improve collaboration between local and national government agencies. This will be crucial to the development of the broader metaverse ecosystem, including for content creators and telecoms operators."
On the topic of security and sustainability, the report points out that "Security is the top priority for network transformation strategies among operators in Asia Pacific. This is not surprising given the backdrop of rising security threats to telecoms networks and, increasingly, to end users." Using Thailand as an example, the GSMA says 56 percent "of cyber threats in 2021 reportedly occurred via vulnerabilities in mobile devices."
The report also notes that "Operators across the region are also accelerating the shift to more sustainable operations, given the demand for a greater focus on energy efficiency from key stakeholders, including shareholders and customers. The industry is addressing the challenge through a comprehensive set of actions, such as the use of solar and improving the energy efficiency of networks.
As for creating policies to facilitate digital innovation, the GSMA asserts that "As society now moves towards a 'new normal' post pandemic, mobile connectivity will be central to the development of new and innovative technological solutions to today's problems. As 5G network deployments continue, 5G's ability to support next-generation offerings (such as cloud services, AI, IoT and edge computing) will drive digital economic growth and innovation."
Moreover, I support GSMA's assertion that "Policymakers and regulators can fuel growth and innovation by finding the proper balance in the regulatory environment to support mobile network deployment and operations." The organization says policymakers should also take steps to:
"These steps have the potential to set the proper foundation to support future economic growth, societal development and technological innovation."
Despite some near-term geopolitical and socioeconomic risks, I remain bullish about Asia Pacific's mobile economy. How are you positioning your business to capitalize on the region's growing mobile market?
Aaron Rose is a board member, corporate advisor, and co-founder of great companies. He also serves as the editor of GT Perspectives, an online forum focused on turning perspective into opportunity.
Posted by Aaron Rose at 12:08 PM