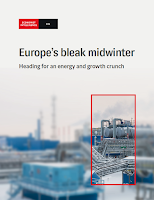 The Economist Intelligence Unit (EIU) provides a stark warning: "Europe is heading for an energy supply crunch this winter. Russia's weaponization of gas deliveries will result in energy shortages, high prices and an economic downturn."
In its report, the EIU points out that "Since its invasion of Ukraine in February 2022, Russia's aim has been to make gas supply to Europe as unpredictable as possible and thus undermine economic confidence and EU resolve on sanctions." What is more, the UK-based organization assumes "that Russia will not increase gas flows to Europe above the current 20% and that cuts to supply may become more severe in the coming months. Efforts to replace Russian gas with other pipelines and liquefied natural gas (LNG) have yielded some results, but cannot go much further in the short term given the limited availability of global LNG supplies and regional regasification terminals."
The report importantly notes: "On the demand side, Europe's gas needs will be suppressed both by the EU's plan to cut demand by 15% and by the impact on consumers of much higher prices. Nevertheless," the EIU expects "some countries to be unable to meet their gas needs this winter, with Germany in particular forced to implement industrial rationing.
Through this report, the EIU aims to answer the following questions:
A cold winter and fraying European Union solidarity could make things worse, the EIU warns. "The economic damage caused by this energy crisis will vary by country. It will also depend on a number of factors that remain uncertain":
The EIU points out that Hungary, the Czech Republic, and Slovakia are the at-most risk economies. "Central European countries will be the worst hit as they will not only face gas shortages this winter, but also suffer from the effects of gas rationing in the German industrial sector, given their integration into German supply chains," the report explains. "Hungary, the Czech Republic and Slovakia have historically relied on Russia for almost all of their gas supply needs, and do not have access to LNG terminals given their landlocked position." Furthermore, "Alternative supplies would have to come via countries that are also set to run short of gas (Germany, Italy and Austria), so supply diversification will be limited, especially if EU solidarity frays."
Recognizing that "Germany is a systemically important economy in the EU" as "it accounts for a quarter of the bloc's GDP," the EIU predicts that "a downturn prompted by gas shortages will have serious spillover effects. The industrial sector accounts for almost 30% of Germany's GDP, and reliance on Russian gas is high, at 35% (albeit down from a pre-war 55% owing to higher imports from Norway, greater LNG supplies and the restarting of coal-fired power plants)." The organization also expects "the main damage to the economy to come from energy-intensive industries such as chemicals, steel, glass and fertilizers, which will be the first to face gas rationing. However, higher prices and collapsing confidence are already affecting other sectors such as machinery and automotive manufacturing, with spillover effects being felt in Italy, Austria and central Europe." 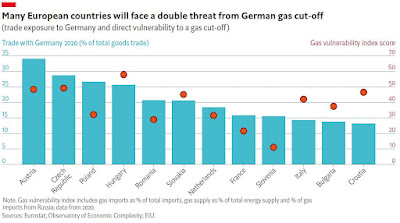 As for France, the report says the west European country "is a wildcard: problems with corrosion as well as scheduled maintenance have taken half of the country's 56 nuclear reactors offline." Moreover, "The newly nationalized energy company, EDF, plans to reopen enough capacity to have sufficient energy for the winter, but uncertainty is high, and for now France is having to import more energy than usual, including from the UK. Should this continue, this could divert further gas supplies from their usual markets, and cause shortages even in countries that appear well supplied."

The report notes that reducing vulnerabilities in Europe's energy supply will take time.
Whether it was during last month's trip to Granada, Spain to attend a conference featuring Spanish startups or more recent online discussions with people living in Europe, I am surprised by the general lack of concern about the looming energy supply crunch and its impact in the economy. Very few people, myself included, expected the Russian military to quickly overtake Ukraine in the former's unprovoked invasion of the latter. Now that sceptics of Ukraine's resilience have been proven wrong, Europeans must be prepared for a protracted war that may last for another two years and perhaps longer.
One consequence of the war in Ukraine is higher energy costs in Europe. According to an article from The Economist: "For most people and businesses, the vague summertime prospect of having to pay more to keep homes warm and factories humming is about to become a harsh wintertime reality."
As another article by the EIU warns: "High energy prices would lead to a surge in bankruptcies as firms become unprofitable. Governments could also halt price protections for households, increasing heating costs further and eroding consumers' purchasing power."
What are your recommendations for how Europe can mitigate the impact of an energy supply crunch on the economy?
Aaron Rose is a board member, corporate advisor, and co-founder of great companies. He also serves as the editor of GT Perspectives, an online forum focused on turning perspective into opportunity.
Posted by Aaron Rose at 4:07 PM