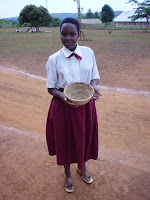 On May 25, 2009, The New York Times published an editorial, "Trade and Hard Times," which accurately explains the importance of supporting foreign trade and avoiding pitfalls of protectionism. The editorial says, "Today, trade is collapsing, one more casualty of the global financial crisis. That is especially bad news for countries that are dependent on trade for economic growth, including many developing nations that had nothing to do with the financial mess." I completely agree. Foreign trade is important for developing nations in getting access to outside markets for their goods. While many developing nations have a service sector that contributes to their respective gross domestic product (GDP) and provides an income for families, developing nations need access to outside markets in order to have a viable chance to truly realize GDP growth and move in a positive trajectory from developing to industrialized status. (Picture of the vocational student who made the bowl is from one of my trips to Uganda)

The Times editorial correctly explains, "Foreign trade has been a potent force for good over more than half a century. It propelled Japan's emergence from the ashes of World War II and helped it become an industrial powerhouse. It is the cornerstone of development strategies from China to Brazil. It is what links countries all over the world in a network of production that underpins global prosperity." Many industrialized countries that enjoy the benefits of a thriving economy (despite a contrary perception during our global economic recession) would not have grown from a destroyed foundation caused by conflict or natural disaster. In addition to Japan as noted above, Germany, with the financial help of the United States, Canada, and European nations, relied on foreign trade to rebuild socially and economically after World War II.

Moreover, according to the Times, "Exports from the United States declined 30 percent and imports 34 percent in the first quarter of the year from the previous three months. Imports into countries that use the euro from outside the area were down 21 percent compared with the first quarter of last year. At this rate, the World Trade Organization’s dire projection in March that global trade would decline 9 percent this year will soon start to look outright boastful. The drop in trade is spreading economic weakness across the world, as one country’s drop in imports translates into a fall in exports, and production, in another." Here in the United States, protectionism will muddle the situation further by restricting trade and reducing economic growth opportunities. Certainly the Ugandan girl pictured above can sell her goods on the local market to her neighbors and passing tourists, but the real potential lies in helping her gain access to outside markets such as Europe, Canada, and the United States.

The New York Times editorial notes that governments of the 20 biggest economies committed $250 million of trade finance over the next two years: "They should keep those pledges, and they may have to do more." While increasing funding may be necessary in the short-term, long-term solutions in achieving sustainable economic development lies within crafting a comprehensive private sector development strategy that facilitates access to markets through foreign trade. This is true in many developing nations such as Afghanistan, Iraq, and Haïti.
Posted by Aaron Rose at 2:11 AM