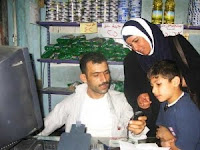 Part of the United Nations system and voluntarily funded, the World Food Program (WFP) is the world's largest humanitarian agency fighting hunger worldwide. The international aid agency launched a pilot project in Damascus, Syria that allows Iraqi refugees to receive food vouchers electronically via mobile phone text messages.
According to WFP's announcement on October 28, 2009, "As part of a ground-breaking pilot project, [an Iraqi refugee] is receiving food vouchers electronically over her phone, which she can then spend in selected government-run shops. Instead of travelling to a distribution center and struggling back with a two-month ration of food, she can now pick and choose to buy what she wants, when she wants." WFP claims this is the first project of its kind in the world. (Photo of Iraqi refugees in Damascus courtesy of WFP/Selly Muzammil)
In describing the details of this innovative initiative, WFP says that "refugees can buy items such as cheese and eggs that are difficult to transport and could not normally be included in a conventional aid basket." Every two months, participants of this innovative project "receive a coded message on a special SIM card, entitling them to a voucher worth US$22 per person. They take their phone along to state-run stores where they can cash in all or part of the 'virtual voucher.'"
"Around one thousand families are involved in the four-month pilot phase, which will be extended if it is successful. The project has been developed in cooperation with the Syrian government, enabling the refugees to redeem their vouchers in state-run stores in the Jaramana and Sayeda Zeinab neighborhoods of Damascus. The mobile phone service provider MTN has donated SIM cards for the project."
According to government estimates, approximately 1.2 million Iraqis reside in Syria, "and, of those, around 130,000 regularly receive food assistance from WFP," explains the Rome, Italy-based humanitarian agency. "Over the last two years, the agency has been texting refugees with the times and locations of food distributions." While other aid agencies have used phone messages and ATM cards to transfer cash to those in need, "this is believed to be the first time mobiles have been used to deliver food vouchers. Schemes involving vouchers are particularly useful in urban settings where food is available but those in need are unable to afford it."
Aaron Rose is a board member, corporate advisor, and co-founder of great companies. He also serves as the editor of GT Perspectives, an online forum focused on turning perspective into opportunity.
Posted by Aaron Rose at 7:13 AM