Microsoft Executive Talks about the Future of Computing 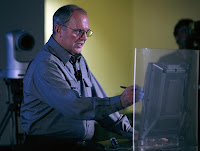 Prior to his retirement from Microsoft, Bill Gates traveled around the country speaking at college campuses about how Microsoft's innovative technologies are providing the tools to help people resolve the problems of today, and tomorrow. Since Mr. Gates' departure from the Redmond-Washington company, Craig Mundie, Microsoft’s chief research and strategy officer, has led the Microsoft College Tour speaking to faculties and students in the United States. From November 2-5, 2009, Mr. Mundie visited four college campuses, Cornell University, Harvard University, the University of Illinois at Urbana-Champaign, and the University of Washington, discussing how the new capabilities in computing will help solve some of the planet’s toughest challenges, from environmental change, to growing the global economy, to improving healthcare and education. These visits provide an opportunity to show the leading-edge work taking place at Microsoft. (Photo of Craig Mundie courtesy of Patrick Riley/The Daily of the University of Washington)

I had the opportunity to attend Mr. Mundie's presentation, "Rethinking Computing," which was part of the University of Washington’s Computer Science and Engineering Distinguished Lecturer Series. He demonstrated future-looking technologies created by the Computational Science Group at the Microsoft Research Cambridge (U.K.) that show how computer science is changing scientific exploration and discovery. He also discussed the role of new science in solving the global energy crisis such as a state-of-the-art global carbon-climate model that allows scientists to study forests in ways not previously possible. With the carbon model, and another model created by Microsoft researchers showing how populations of trees actually grow, scientists can study how deforestation in the Amazon basin can affect forests worldwide.

Mr. Mundie talked about how machines will respond to gestures through new natural user interfaces, deploy the power of new microprocessors, migrate data to the cloud, and use live data to drive new simulations and visualizations. "We think computing is in its infancy," said Mr. Mundie, noting many people view computer technology has become passé and invisible. "It's going to be important to continue investing in computing. Without it, we'll have difficulty solving these problems." Explaining that the benefits of computing will have to scale as the planet's population increases, Mr. Mundie said, "we will need to move beyond the tradition point-and-click of the graphical-user interface."

The next big change we will see is in display technology, where "we will have a richer way to interact with the computers." The natural user interface (NUI) will create an interface enabling computers to work for you and search using human-like interaction technologies like ink, eye tracking, and voice. Mr. Mundie provided a demonstration of the latest NUI designed by Microsoft's Cambridge research group.

On the topic of cloud computing, Mr. Mundie "sees the cloud as a high scale, often data driven computing assets that are being built now and I think the next big thing will be to think the cloud and the intelligent clients as one big distributive system, not two heterogeneous things that we are forcing to talk to one another."

I enjoyed listening to the presentation and I feel that Microsoft is producing innovative computing technologies that will provide a great benefit and new experiences to users worldwide. One important area where we will see these benefits is in the policy making arena. As Mr. Mundie demonstrated, a new method of computing will become an essential tool for policy makers in making informed decisions. While I see the technical value in the natural user interface, cloud computing will revolutionize the way people access, store, and use information, which I will discuss in greater detail in this blog.
Posted by Aaron Rose at 10:40 AM