Transatlantic Trends 2009: A Survey of European and American Opinions 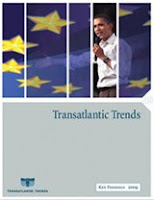 On November 19, 2009, I attended a briefing, sponsored by the Trade Development Alliance of Greater Seattle, featuring Zsolt Nyiri, Ph.D., Director of Transatlantic Trends at the German Marshall Fund of the United States in Washington, DC. Dr. Nyiri's presentation on Transatlantic Trends 2009, a project of the German Marshall Fund and the Turin, Italy-based Compagnia di San Paolo, with additional support from the Fundação Luso-Americana (Portugal), the Fundación BBVA (Spain), and the Tipping Point Foundation (Bulgaria), "measures broad public opinion in the United States and 12 European countries and gauges transatlantic relations through interviews with more than 13,000 people." There are a few highlights that are worth discussing in this post.

For the eighth consecutive year, participants were asked their views on each other and on global threats, foreign policy objectives, world leadership, and multilateral institutions. During this time, Europeans took a very negative view of U.S. President George W. Bush. According the Transatlantic Trends, "U.S. President Barack Obama had nearly reversed the collapse in public support for the United States witnessed across much of Europe under his predecessor, President George W. Bush." In fact, my mid-2009, Mr. Obama "enjoyed far more support in Germany, Britain, and even France, than he did in the United States. Such sentiments provide a popular foundation for a revitalization of U.S.-European ties."

Statistically speaking, 77 percent respondents in the European Union and Turkey supported Mr. Obama’s handling of international affairs, compared to just 19 percent who approved of Mr. Bush’s foreign policy in 2008. Furthermore, according to the report, “People of the EU and Turkey (77%) were considerably more likely to approve of Obama than were his fellow Americans (57%). However, segmenting the EU and Turkey stats paints a different picture: Central and East Europeans (60%) were significantly less enthusiastic about Mr. Obama's handling of international affairs than were people in Western Europe (86%), and were less likely (53%) to see America in a positive light than were West Europeans (63%). Lastly, "Fewer Central and Easter Europeans (25%) than West Europeans (43%) believed that relations between the United States and Europe had improved over the past year."

During the presentation discussing the economy, which Dr. Nyiri called "The Dog that Did Not Bark," Americans and Europeans share the belief "that managing international economic problems should be the top priority for the American president and European leaders, trumping concerns over international terrorism, climate change, or the Middle East." The Obama effect is evident in Europeans' attitudes where 79 percent approved of Mr. Obama's handling of international economic affairs during his first months in office; whereas, only 53 percent of U.S. respondents felt the same as their European counterparts.

With respect to the economic crisis, "More Americans (69%) were very concerned about the economic situation than were people in the European Union (47%). This difference reflected a more intense personal economic experience with the crisis. Three-in-four Americans (74%) compared to just over half of Europeans (55%) said their families had been impacted by the recession." Dr. Nyiri attributed the difference as a result of strong social programs Europeans benefit from their respective governments.

Dr. Nyiri further discussed the "overwhelming majorities of respondents in the United States (75%) and in the European Union (82%) thought the current crisis could only be solved with fundamental changes in the way the economy is run." He then noted when separating the responses by political affiliation in the United States, Democrats (85%) and Independents (80%) supported major reform more than Republicans (69%). "In Europe, support for change was more equally shared by respondents of all political persuasions."

And 79 percent of Europeans and 67 percent of Americans believe "that government has an important part to play in regulating the economy. In the United States, however, significantly more Democrats (80%) than Independents (65%) and Republicans (61%) believed in such a governmental role. In Europe, conversely, there was almost no ideological disagreement on this issue."

69 percent of European respondents supported policies to combat climate change even if it stymied economic growth. "The French (79%) were the most willing to sacrifice economic advantage for a cooler planet. The Slovaks (53%) were the least willing among Europeans. Only a plurality of Americans (43%) would make such a tradeoff."

I found Dr. Nyiri’s presentation informative regarding the "Obama Bounce" and its positive affect on Europeans attitudes regarding the United States. However, this positive sentiment does not transcend to supporting the wars in Iraq or Afghanistan, or using military force to halt Iran from acquiring nuclear options. And while Mr. Obama has enjoyed vast support from the European Union and Turkey, the honeymoon could end very abruptly if the economy does not rebound at a reasonable rate.

Moreover, as Mr. Obama recently indicated, the United Nations climate change conference scheduled for December 7-18, 2009 in Copenhagen, Denmark, the United States is not prepared to enter into a new global climate-change treaty on limiting emissions of greenhouse gases that would replace the 1997 Kyoto Protocol. I suspect this will adversely affect Mr. Obama's support from Europeans and perhaps, American Democrats.
Posted by Aaron Rose at 10:00 AM