This past spring, I observed the tradeshow and final round of the 12th Annual Harriet Stephenson Business Plan Competition hosted by my alma matter, Seattle University (SU). 23 teams competed for over $20,000 in prize money. I was very impressed by the broad spectrum of sectors represented and the creativity of the business strategies presented. There are certain observations from the presentations that are worth discussing.

I receive plans from businesses at different stages looking for funding and many of these plans lack a comprehensive competitive strategy. The contestants at this year’s competition are no exception. Too many businesses outlined competitive strategy by saying “there are no competitors.” As an entrepreneur and business advisor, I promise you that no matter how unique a business idea may be, someone out there in the world is thinking the same thing. I recall when Yahoo! Inc. launched its web portal in 1995 when very few competitors existed. When Yahoo became a publicly-traded company in 1996, the Sunnyvale, California-based company was in the position to be the market leader for years to come. Then a little unknown company called Google Inc. was launched in 1998 and within just a few years, Yahoo quickly lost its competitive advantage to the Mountain View, California-based company. Yahoo continues to struggle in finding its niche in the marketplace. (For disclosure purposes, I am a shareholder of Google.)

Another example I like to use in how a market leader can find itself in trouble by losing sight of its competitive advantage is Palm, Inc. While Palm was not the first to introduce touchscreen smartphones, it was the first to produce this innovative product at a competitive price. When I purchased my Palm Treo in 2005, there no product such as the Apple iPhone or Google Droid (Research in Motion’s BlackBerry was Palm’s primary competitor in the smartphone sector at the time). Fast forward five years and not only did Palm not stay ahead of the competition, but the Sunnyvale, California-based company was acquired by Hewlett-Packard on July 1, 2010.

The point here is that while an entrepreneur may think his or her business idea is truly unique, the reality is that a comparable service or product will enter the market sooner than most entrepreneurs realize or anticipate. How will your company remain a leader as competitors enter the market?

Another common mistake is that some competitors possessed gaps in their management team. I was mystified to see a few contestants lacking people in key roles such as Chief Executive Officer or General Manager. I understand that some people may be the creative leader of the company, how can they expect to receive financial support from an investor if there is no one to lead the company? I can attest that value of any company is not the service or product per se, but the people leading the day-to-day operations. One point I often stress in my entrepreneurship seminars is that investors invest in people more than they invest in ideas. Whether we realize it or not, each one of us has million (or billion) dollar ideas. However, very few people in the world have the ability (and a little luck) to implement their ideas.

Each team presenting at the tradeshow provided a one-page handout outlining the company’s mission, deliverable, value proposition, financial strategy including amount sought from investors, and other pertinent information. This is a small issue, but I am surprised by the number of competitors who failed to provide their contact information (phone number, email address or website) on their handout. 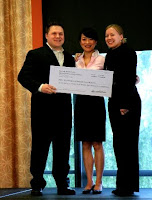