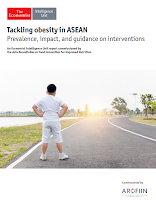 According to a report commissioned by the Asia Roundtable on Food Innovation for Improved Nutrition (ARoFIIN) and produced by The Economist Intelligence Unit (EIU), "Obesity is a growing public health burden, not just in affluent countries but also in many developing nations at all income levels." The report, Tackling obesity in ASEAN: Prevalence, impact, and guidance on interventions, further explains: "Increases in obesity prevalence are driven by a range of interlinked factors, including rising incomes, urbanization, shifting lifestyles and genetic factors that may trigger obesity among individuals in once food-scarce environments. Obesity incidence is also rising steadily, bringing with it new challenges. The Association of South-East Asian Nations (ASEAN) is no exception to these trends."

Importantly, the EIU report notes that "if action is not taken, countries could find themselves fighting a range of related non-communicable diseases (NCDs), including type 2 diabetes, cancer, cardiovascular disease and stroke, as well as a range of chronic diseases including musculoskeletal disorders." Furthermore, "For some countries, this challenge will emerge as they continue to battle a range of communicable and infectious diseases, as well as undernutrition in some portions of the population, placing a great strain on public health systems."

The report concludes that "obesity and overweight represent a growing public health threat in ASEAN countries. Although the region currently has among the lowest rates of prevalence globally, it is likely that this reflects its relatively low income status, which will change as countries grow their economies." Moreover, the correlation between economic development, urbanization, rising incomes and increasing obesity suggests that ASEAN countries are going to face substantial difficulties related to obesity and the NCDs it causes, including cancer, diabetes, stroke and heart disease."

Encouragingly, the report "has identified several promising pathways for the future:
The goal of the paper is to help guide ASEAN's "policymakers, health organizations and industry to work together and tackle the rising threat of obesity in the region." What strategies do you think should be implemented to reduce the growing public health threat caused by obesity in ASEAN countries?

Aaron Rose is an advisor to talented entrepreneurs and co-founder of great companies. He also serves as the editor of Solutions for a Sustainable World.
Posted by Aaron Rose at 11:42 AM